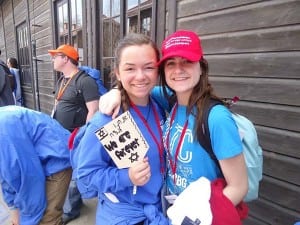 First and foremost, I would like to thank the Jewish Community of Louisville, Cantor David Lipp, Sara Wagner and the March of the Living Fund established by Natania Lipp, as well as my parents for giving me the opportunity to attend and participate in the March of the Living. This journey to Poland and Israel was a huge milestone in my life! I learned the true meaning of “Kol Yisrael arevim zeh lazeh” – all of Israel is responsible for each other.

I felt extremely connected to my Jewish and Polish heritage. My great-grandfather, Ben Kroopkin, emigrated through Ellis Island from Poland. He owned a grocery business in downtown Louisville for many years.
I joined many friends I knew from BBYO conventions over the years, and met many new friends along the way. My roommate was from Indianapolis and her mother grew up in Louisville, attended Atherton High School, and lived on Rexford Way. Her aunt knew my dad.

It was simply mind-boggling to meet a family member from south Florida on Ben Yehuda on the other side of the planet. I learned that no matter where we are in this world, the Jewish people only have each other and we are responsible for one other and interconnected, despite our language, geographic, and cultural barriers. This journey was a unique, emotional experience I will never forget. 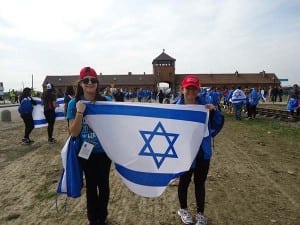 The March of the Living is a trip in which delegations from around the world come together to represent the vibrant, soulful, spirituality of the Jews alive today. I was a participant in the USA, BBYO delegation.
We spent the first week in Poland, where we visited multiple concentration camps, an Old Jewish Quarter, the site of the Warsaw Ghetto, a museum, and many other sites relevant to the Holocaust.

The first camp we visited was Auschwitz. Auschwitz was not the typical vision I had of a concentration camp. I felt as though I was in a college or some community with uniform buildings, although it was an extremely large place. However, I realize that not even Father Time can erase what actually happened there.

As we walked through the exhibits, there is one that remains imprinted on my mind. It was a re-creation of children’s drawings along the walls. The drawings reminded me of the artwork that I watched my campers draw at JCC Summer Camp, and I realized how young these kids were. They never had the experiences that children normally have, and they were robbed of their childhood and innocence. It made me very angry.

After Auschwitz, we made our way to Birkenau. Here is where I first felt trapped, because there is a one-way railroad track into the camp with no way to escape. Hundreds of victims were crammed into one cattle car that is smaller than my bedroom. It is hard to even imagine what was going through their minds as they entered this camp.

The next day, we revisited Auschwitz for the March of the Living. I marched with 10,000 other people from around the globe from Auschwitz to Birkenau. I had the opportunity to walk out of the camps in memory of those who did not, and most of all, I did this holding hands with a survivor. Her name was Trudy Album from Suffern, NY, and she comes back every year to educate my generation. 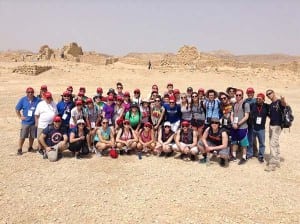 She was sent to Auschwitz in June of 1944. She says that, “we laugh and we cry, because this is the Jewish way” and she is such a happy person and is truly an inspiration. She also says, that “you [we] are now the witnesses.”
I thought I had seen the worst and that it was over, but I had not. The worst was actually the next day.

The Majdanek death camp is the camp that could be up and running within 48 hours, and the most shameless part of all was that it was in the backyard of a neighborhood.

This camp had an extremely eerie feeling. In this camp, there was a museum, and while the group was in the museum I went next door, because I had finished looking around. I had no idea what I was getting myself into. I walked into a pitch-black room with little light in the middle, and voices surrounding me. There was no one in sight, and after that experience I was shaking for the rest of the time.

I saw the crematorium, which had a bathtub in it because that was the hottest water in the camp. I saw the trenches where my people were murdered en masse and covered up with dirt, but the most horrific part of this camp was yet to come.

I walked up about 20 steps into a memorial, looked down and saw a 15-foot high pile of ashes that was about 30 feet in diameter. This was the moment, right where I was standing, that the magnitude of the numbers and what happened here truly hit me. The disgust, anger and sadness all came at once. I could not bring myself to take a picture, nor did I want to talk about what I saw until I was out of that camp.

We finished the week with a relaxing Shabbat, and our final camp tour at Treblinka. Here I led the closing ceremony and recited the traveler’s prayer as we departed for Israel.

I arrived in Israel and the first Israeli staff member I saw was Natania Lipp! I was thrilled to see her. She was a junior staff member on the Israel portion of my trip. I was amazed at how small the world actually is, and everyone was shocked that there was another Kentuckian in Israel. We hopped on the bus and went straight to Masada where I felt like I was on top of the world. We then swam in the Dead Sea, visited Independence Hall, did some shopping and hung out on the beach.

The following night, we went to the Erev Yom Hazikaron ceremony, which commemorated the fallen IDF soldiers. The pride that Israelis have for their country and the respect they have for their soldiers and military was simply phenomenal.

It taught me to be a prouder and more supportive American and to appreciate what our brave men and women of the United States Armed Forces do to make our country safe and to protect our freedoms. Israelis really know how to support their troops.

We observed the Yom Hazikaron siren the next morning, went to the Kotel (Western Wall), explored the City of David, and finished off the night at Ben Yehuda Street where we celebrated Israel’s Independence Day. 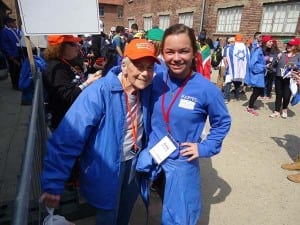 We concluded our experience in Israel by continuing the March of the Living in Jerusalem where I bought my parents a beautiful Seder plate, visiting the Mt. Herzl National Memorial Grounds, touring Kibbutz Nir Tamid, shopping and relaxing on Shabbat.

I really loved the Galilee and cruise on the Mediterranean Sea. This experience in Israel drastically changed me, cemented my Jewish pride and identity, and made me realize how absolutely amazing it is that we, as Jews, are still here.

Israel is magical. The historical sites and natural treasures are breathtaking. I don’t believe a Jew really knows how Jewish he or she actually is until they step on Israeli soil.

Once again, thank you to everyone who made it possible for me to experience these life-altering two weeks. It puts all of my years of Jewish studies, bat mitzvah and confirmation into perspective.

Editor’s note: Emily Schulman is the daughter of Butch and Robin Schulman and sister of Benjamin, Halle and Matthew Schulman. She is the granddaughter of Howard and Dorothy Schulman and Rudell Franck and the late Dolly Franck.

She will be a senior at Sacred Heart Academy where she plays varsity softball, is a member of the Engineering Club, and is vice president of the National Honor Society. This summer, she has been selected to attend the Global Youth Summit on the Future of Medicine at Brandeis University in Boston, MA.

The JCC’s Early Learning Center Spring Sing has grown immensely in recent years. This year, funds raised in the auction and raffle have topped $7,500, which is a huge success, over $1,500 just two years ago. “The parent committee worked …