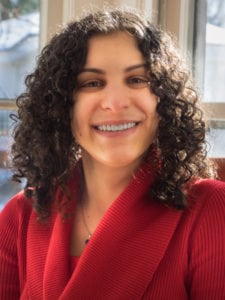 I returned from my Birthright Israel adventure, completely exhausted but also full of multitudes of happy memories. Although this had been my fourth trip to Israel, traveling with a peer-led group allowed me to experience familiar sites and destinations in an entirely new way.

On the hot and humid third day of the journey, we picked up our Israeli students and soldiers and sailed Lake Kinneret on a party boat. We danced with such exuberance that the captain sailed an extra 45 minutes. Already extremely behind schedule from the captain’s decision, our tour guide’s rush to get to the next destination despite horrendous traffic just brought us closer together as a group, and gave those traveling on our bus material for inside jokes. 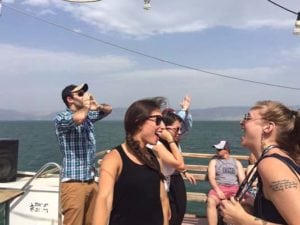 In the Old City of Jerusalem, we visited the Davidson Archaeological Gardens and climbed stairs to a platform and elevated walkway from which we could see Jerusalem from an entirely new perspective. We also visited the new mixed platform at the Western Wall, and I even noticed a husband wrapped in a tallit and tefillin praying on a stairway landing closer to the Western Wall all with his wife, son, and daughter.

We were fortunate to have a former NFTY song leader, Liz Bossov, as a participant on our journey. She compiled and led a beautiful Friday night service, which everyone enjoyed and found meaningful. The service was a highlight of the trip for me and many people in our group, even those who did not participate in NFTY. After the service, we socialized for hours at the hotel bar, which was the first opportunity I had to meet and mingle with many of my fellow travelers.

One of my favorite parts of Birthright was Kfar Nokdim, a touristy Bedouin village on a desert oasis near Masada. We rode camels – something I found both nerve-racking and exhilarating, and have now gotten off my bucket list – just before sunset, and participated in informative, entertaining workshops.

We left at 4 a.m. to drive to Masada, climb the Roman Ramp, and see the sunrise. The golden-orange light warmed the surrounding archeological site and cast long shadows on the ground. The view from the Snake Path was beautiful; I could see all of the remaining Roman encampments around the base of Masada, and the miniature mesas and canyons cut by floodwaters into the parched ground below looked like a diminutive model of the surrounding landscape. 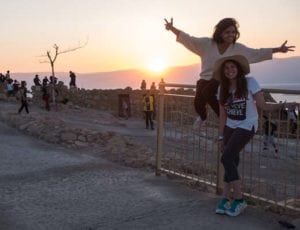 Some of my best memories were with the Israeli participants, who were all unique, amazing individuals who enriched our experience by offering their own perspectives at different sites, including at Mount Herzl, where several of them shared their memories of friends who died during battles.

They were also incredibly fun people, who played guitar, sang, and joked and laughed with us. Birthright would not have been the same without them, and when they left on the seventh day of the trip, we missed them terribly. Apparently, they missed us, too, because all but one of our seven Israeli participants came back to see us before we departed Israel!

The most remarkable occurrence of all, though, is that we started the journey as two staff members and 40 individuals who live across the country, from California to New York City. Over the course of 10 marvelous days, the staff, American and Israeli participants, tour guide, and medic-security guard on our bus became a family. We supported each other and made indelible memories together in an unforgettable place.

I returned from my Birthright Israel adventure, completely exhausted but also full of multitudes of happy memories. Although this had been my fourth trip to Israel, traveling with a peer-led group allowed me to experience familiar sites and destinations in …

Jewish Hospital was founded on a mission to provide free care to all, especially Jewish immigrants arriving to this country with little to no resources. The Torah teaches us that as we were once strangers in a strange land, so …