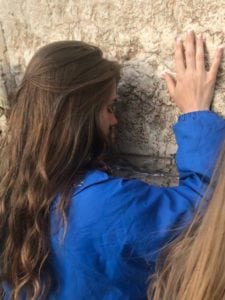 As her friends prepared to blindfold her for the walk through Jerusalem’s Old City, ending at the Western Wall, Gia Blum made a life-changing decision.
The 18-year-old Atherton High School senior pulled out her cell phone and texted her mother back in Louisville, telling her that she didn’t want to go to college right away. She wanted take a gap year in Israel.
“I just figured I had more courage than I was ever going to have,” Blum recalled, “and I realized if I didn’t do it right then, I’d never do it.”
All during the walk, Blum was nervous, wondering how her parents, Jeff and Lisa, would take the news, but her nerves subsided when the throng of teens, all participants in the March of the Living, reached the Kotel, where her friends removed the blindfold.
“I saw everyone there crying and being with each other,” she said. “It felt like … you know.”
Blum, who just graduated from Atherton, will return to Israel on September 2 for an eight-month Young Judea program for gap year high school graduates. She will spend half her time in Jerusalem studying Hebrew and Jewish subjects, and the other half in Tel Aviv, doing community service work, most likely with Mogen David Adom – Israel’s version of the Red Cross.
For a young woman who grew up as a completely secular Jew, it will be life changing, indeed.
“My family was very, very secular,” Blum said. “I didn’t go to day school or anything like that. I went to a public school and I was the only Jewish kid in my class – every year. So I really didn’t have much exposure at all to the Jewish community.”
All that changed when Blum worked as a counselor at Camp J. Last year, then-Teen Director Kari Semel asked her if she would like to take a free teen trip to the U.S. Holocaust Memorial Museum in Washington, which fell through when it became apparent there were more teens than tickets.
So Semel promised her she would be first on the list for this year’s trip. Only this year’s trip wasn’t to Washington, but to Poland with March of the Living, an annual gathering of Jewish teens at the sites of the Holocaust followed by a week in Israel.
Poland, Blum explained, taught her a sobering new perspective for her own life.
“For kids my age during the Holocaust, college wasn’t on their minds at all,” she said. “They were going through things so much bigger. They were losing family members, losing their own lives, struggling to be alive. It really just made me see there are so much more important things in life than going straight to college and doing everything society tells you to do.”
So when she heard some of her friends from the March talk about taking a gap year in Israel before starting college, she became jealous. She wanted that gap year, too.
“At that point, I was already committed to college,” Blum said. “No one, including me, expected this to happen.”
That led to the night in the Old City when, by March of the Living tradition, first-time visitors to the Kotel are blindfolded, so they can feel the full emotional experience once the bandanna is removed.
Blum’s mother, Lisa, felt taken aback by her daughter’s text.
“But I was also touched by her emotion,” she said, “and how much the experience had affected her. It kind of gave me chills, but in a good way. We always wanted her to be happy, and it seemed like this was making her so happy.”
An extension of Hadassah, Young Judea is a self-described Zionist youth “movement” that brings together thousands of Jews, from all backgrounds, in summer camps and year-round programs in the United States and Israel, empowering future Jewish leaders.
With one trip to Israel done and another about to begin, “Blum said she can “absolutely” see herself as an advocate for Israel programs to young people as life-changing experiences.
Without March of the Living, she said, “I would still be sitting at home, completely oblivious [to Israel]. I think all it takes to get someone interested is more knowledge, more experience.”