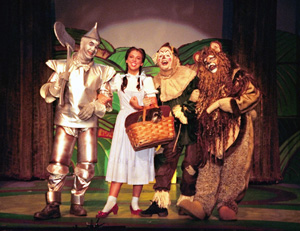 If there is a single movie that is indelibly etched in the memories of most Americans, it is The Wizard of Oz. Year after year as I was growing, I remember waiting for it to come on TV, anticipating the moments when Dorothy would tell Toto that she doesn’t think they are in Kansas any more, the titters of the munchkins, the antics of her new friends, the Scarecrow, the Tin Woodsman and the Cowardly Lion, and their ultimate defeat of the Wicked Witch of the West.

That means that any theater company that dares to stage a live performance of this classic has a tall order to fill if they are even going to come close to those vivid memories from childhood.

Well, I’m pleased to say that the CenterStage Company is well up to the task. Olivia Duff did Judy Garland proud, often mimicking the film star’s gestures and inflections so closely that she became the same Dorothy that I have always loved.

I’m not sure which of the motley trio of characters that accompanied her along the yellow brick road to Oz was my favorite. Kyle Braun made us believe that he was stuffed with straw as he tumbled and stumbled along in search of a brain. Frank Goodloe gave one of his best performances ever as the Tin Woodsman, and Monty Fields must have been channeling Bert Lahr when he said, “Put ’em up, put ’em up,” only to break down in tears when Dorothy slapped his nose. And it was almost like Professor Marvel/the Wizard of Oz was written for Gene Dorf.

The set design and stage crews also deserve kudos for this show. The scenes change at a dizzying pace as we move from Munchkinland to the fields to the forest to Oz. And casting dancers for the poppy field was a stroke of genius.

CenterStage, under the direction of John Leffert, always delivers professional quality performances. With the Wizard of Oz, they have outdone themselves.

Next up: Forever Plaid, starting May 6.