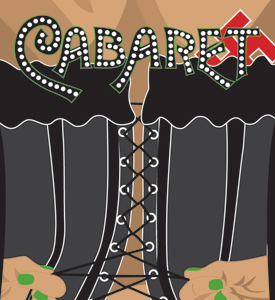 When CenterStage Artistic Director John Leffert put together his list of plays for his 10th season, most of the shows he chose were his favorites from his tenure with the Jewish Community of Louisville’s theater company at the Jewish Community Center. It is hardly a surprise the Cabaret made his list. I’m sure it would make the top 10 list of many of CenterStage’s patrons as well.

Set in Berlin in 1931, the Joe Masteroff play with unforgettable music by John Kander and Fred Ebb draws the audience into a city of contrasts. Aspiring American writer Cliff Bradshaw (Alex Craig) finds himself collected by Ernst Ludwig (Jon Adams) who helps him secure an inexpensive room near the bawdy Kit Kat night club.

The tawdry night life draws him out and he connects with one of the club’s featured performers, Sally Bowles (Melissa Shepherd), just as she loses her job. Add in a blossoming romance between his aging landlady, Fraulein Kost (Jessica Adamson) and a Jewish grocer, Herr Schultz (Gene Dorf) and a growing awareness of the rising strength of the Nazi party as it begins to assert its anti-Semitism and you have the makings of an evening of a compelling drama combined with bawdy fun.

The CenterStage company continues its excellent work, as Leffert again brings out the best in every member of the company. The real standout in this show, however, is Pete Lay, who plays the Kit Kat Club emcee. Always out in front and keeping the show moving, he truly draws the audience into the club experience and connects them with the story.

Melissa Shepherd also deserves special mention. Every role she undertakes is gold. Her performance of the well-known piece “Cabaret” captured every conflicting emotion Sally Bowles might feel as an exploited showgirl who is so addicted to the club life that even when offered the opportunity to escape when she sees the true face of Nazism just can’t bring herself to break away.