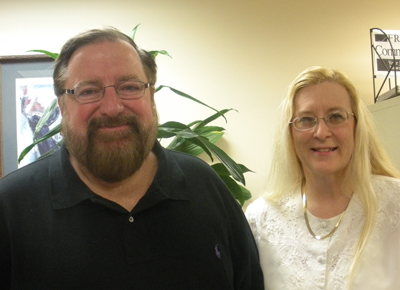 In Pirkei Avot, the Ethics of the Fathers, we learn that while it is not our responsibility to complete the work of making the world a better place, we are not free to ignore it. So in the Jewish community, there is a strong commitment to tikkun olam – the repair of the world.

That commitment to helping others extends well beyond the Jewish community, and is embraced by people of faith everywhere. The Jewish Community of Louisville has a tradition of honoring those who go above and beyond in improving life in Louisville with the Blanche B. Ottenheimer Award; this year the award goes to Rev. Timothy and Nina Moseley.

This husband and wife are the visionaries that have turned Wayside Christian Mission from an overnight shelter for the homeless into a network of partnerships that not only provides food and shelter, but offers opportunities to help people turn their lives around.

When the Moseleys talk about their work, their eyes sparkle and their energy and enthusiasm fill the room.

Rev. Moseley was born in Little Rock, AR, and came to Louisville in 1978 after completing his B.A. at Ouachita Baptist University. He earned his Master of Divinity from the Southern Baptist Theological Seminary in 1982 and his Master of Science in Social Work from the University of Louisville’s Kent School in 1983.


He completed social work internships at Louisville Memorial Primary Care Center and Central State Hospital, worked as a chaplain and chemical dependency counselor at Charterton Hospital and as an aftercare program supervisor and counselor at Charter Care.

“Toward the end of my studies at Kent School,” Rev. Moseley said, “I looked at other placement opportunities,” as far away as Alaska, “but decided to volunteer down at Wayside,” which fit in with his long-term goal of working with people in poverty.

When he arrived at the mission in 1985, Rev. Moseley was in for a surprise. After explaining his objectives and qualifications to executive director Dale Tucker, Tucker said he was giving up his position to take a foreign mission job. “So he said, ‘You might want to apply for my position.’ Within two weeks,” Rev. Moseley said, “I had the job.”

It might have been his dream job, but a week later, at a Board meeting, he learned that Wayside Christian Mission had serious financial problems. Not to be deterred, Rev. Moseley spent the next two years shoring up the organization’s funding and taking it to the point where he could begin dreaming about the future and transforming the shelter.

A Louisville native, Nina Moseley and her siblings grew up working in the family business, Victor Mathis Florist. She attended Loretto High School through her junior year, and when it closed, she transferred to Flaget High School for her senior year. She was one of 16 in the only group of girls to graduate from Flaget.

“I had no idea I would ever be doing this kind of work,” she said of her work at Wayside. She had been working for Stewart’s downtown when the store was sold to L.S. Ayres, and continued to work there through subsequent sales to Snyder’s and Hess Department Stores, holding the positions of collections manager, cash office supervisor and credit analyst.

In 1988, Moseley decided to interview for the secretary’s position at Wayside. At that time, the mission served as an only overnight men’s shelter. “Guys would start lining up at 4 p.m. waiting for the shelter to open,” she said. “So when I pulled up for my interview, the guys were lined up down the street and I had to cross the line for the interview.”

Unsure of what to do, she waited in the car for a while trying to decide whether to proceed. After a while, the men noticed her and began to knock on her car window, looking for handouts.
“I finally got out and went in and met Tim,” she said. After talking with him and taking a tour of the facility, she decided to give it a try.

“It was a completely different world, and I was a little bit apprehensive,” she explained, but as she got to know the people, she found she had opened the door to an exciting career.

Rev. Moseley is not just a gifted administrator; he is also an able talent scout, identifying potential in people before they recognize it themselves. “Tim will make you stretch and do things you never thought you could do,” Nina said.

“I couldn’t talk in public when I arrived,” she stated, “and eventually he got me to go out and speak to groups.” He encouraged her to go back to school, too. So she earned a B.S. in Business Administration from the University of Louisville in 1994 and a J.D. from U of L’s Brandeis School of Law in 1998.

She credits him for pushing her to make the transition from being “content with being a secretary to a rabble-rouser,” and, along the way, they got married.

Wayside Christian Mission has grown and changed under the Moseleys’ leadership, too, and there have been challenges along the way.

At one time, the city made it almost impossible for a homeless shelter to operate. The mission’s building downtown was not in good repair and it was bursting at the seams with clients. Louisville’s Board of Zoning and Adjustment told them they couldn’t move the shelter anywhere else in the city because shelters were not mentioned anywhere in the zoning laws. Therefore, they either had to stay where they were or cease operations.

The Moseleys filed a complaint with the U.S. Department of Housing and Urban Development (HUD) to “get Louisville straightened out.” They tried to purchase the old Mercy Academy building and failed.

Then the hotel on Broadway, where Wayside Christian Mission is located today, came available and a pitched battle began. There was opposition to locating a homeless shelter in that part of town, and Jefferson Community and Technical College (JCTC), located across the street, was also interested in the property.

With help from many people, the Moseleys secured the property for Wayside. They reopened the property as a hotel with two rates – an economy rate of a penny a night, and the full rate of $140 a night, and “we paid taxes on the pennies,” Rev. Moseley said. To ensure their clients could afford the economy rate, Wayside gave them rolls of pennies and collected a month’s rent at a time.

There were people who paid the full rate, too – mostly travelers coming off the interstate. And the revenue not only generated taxes for the state, but needed funds for utilities and other expenses.

Always the innovator, Rev. Moseley recognized the potential of the situation. Today, Wayside Christian Mission has many faces. It still serves as a shelter, providing emergency services for the homeless; but it is also much more. It has become a gateway to the future for Wayside’s clients, and a continually expanding resource for the community, partnering with a wide variety of other organizations.

Today, JCTC offers a one-credit class at the mission, where students do a career assessment and learn the skills they will need to be successful students, and how to apply for college and financial aid. Jefferson County Public Schools hold GED classes there, and the University of Louisville takes residents from the shelter to orientation and computer classes on the Belknap Campus.

The hotel’s 11th floor has become a career floor, functioning like a college dorm, with singles living two to a room and a resident assistant. There are also some families living on that floor, and they watch each other’s children so they can attend classes and study.

Since the mission functions as a hotel, and the hospitality industry offers many opportunities for employment in Louisville, Wayside has become a training site for hotel jobs.

Maintaining the facility also requires a steady stream of income, so Wayside is leasing space to other non-profits in addition to renting hotel rooms. The Dream Factory’s national offices are located there, and Hospital Hospitality House rents rooms on a sliding scale to anyone who needs a place to stay while receiving medical treatment in Louisville.

The Moseleys have also built partnerships with other agencies. Phoenix Healthcare for the Homeless, which sends caseworkers to the shelter and will be opening a clinic for the homeless there this fall in conjunction with JCTC’s Nursing Department. JCPS provides crisis intervention and transportation for children who become homeless to enable them to continue to attend the same schools.

In addition, U of L will hold some Psychology Department classes at Wayside and offers classes in parenting skills and family literacy. Nursing schools from several local colleges and universities also provide health education to Wayside’s clients.

Wayside also rents rooms at a reduced rate to groups doing mission projects. For just $25 a night, the groups can put up to four youngsters in a room, which makes it affordable and convenient for groups that often operate on a shoestring.

What’s a hotel without a restaurant? What used to be the hotel’s bar is now the Holy Grounds Coffee Shop. The Moseleys work with Surgenos, a local roasting company, which helped them get started by training some Wayside people to make the different drinks.

The mission also runs a café that offers a $5 buffet meal and operates the ballrooms for weddings and other events. “It’s a great training opportunity,” Nina Moseley said. It helps the residents “feel like a team. They know the work they’re doing is keeping the whole operation going.”

Wayside also keeps the Good Samaritan Patrol on the streets, providing outreach for the homeless in life-threatening weather, and its community kitchens serve an average of 2500 meals a day to the homeless and hungry.

The Moseleys say they are honored and humbled to receive the Ottenheimer Award and enjoy working with several different groups from the Jewish community.