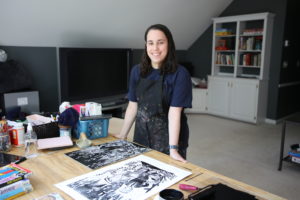 Ally Doctrow of Louisville, a recent graduate from the Milwaukee Institute of Art & Design, pictured here while demonstrating how she made some of the prints for her senior project, “Recipes for Disasters.” She hopes the work will generate serious discussion about anti-Semitism. Above right, the title print from the project. (Community photo by Robbyn McClain)

Ally Doctrow has been making art with Jewish themes for two years, but nothing as intense as this.
For her senior project, the 21-year-old recent graduate from the Milwaukee Institute of Art & Design (MIAD) created a digital “cookbook” for anti-Semitism, illustrated by unsettling prints, most of which were digitally designed, sometimes funny, always dark and consistently provocative.
The result: a web product called “Recipes For Disasters,” hosted at allydoctrow.com, which includes five recipes: “How To Create False Confidence”; “How To Lower Someone’s Self Esteem”; “How To Make People Blindly Follow You”; “How To Hide Your Judaism”; and “How To Fuel A Genocide.”
Each recipe comes complete with its own step-by-step instructions and ghoulishly funny – and faux – reviews replete with five-star ratings.
Though the project was done with anti-Semitism in mind, Doctrow said it could just as easily apply to Blacks, Hispanics, Asians, Pacific Islanders, LGBTQ and any other group that feels threatened.
This isn’t just art. Doctrow, a Louisville native who completed the four-month project at home when her school went remote for the pandemic, did extensive research on anti-Semitism, annotating her sources on the conclusion page of the project.
“I think Ally’s project is kind of unique in that it is so deeply researched,” said Judith Harway, professor of writing and humanities at MIAD, who served on Doctrow’s thesis panel. “It has such a boldness … and she’s not afraid of causing discomfort in the service of making a serious point.”
Compared to other projects, Harways added, “the combination of text and image was unique, because she gave equal focus to the text.” 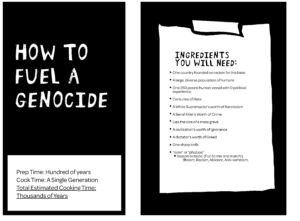 A sample print from Doctrow’s “Recipes for Disasters” project.

In one her findings, Doctrow reports that 82 percent of American Jews said anti-Semitism had increased over the past five years, compared to 43 percent of the general public, according to the AJC.
“There’s such a discrepancy between people who are Jewish who feel they have been victims of anti-Semitism,” Doctrow said, “and the general public who doesn’t see the anti-Semitism because they are not experiencing it.”
A daughter of Matt and Amy Doctrow, Ally, who grew up at Temple Shalom, had a Jewishly active youth – religious school, a bat mitzvah with her twin sister, Bailey. Normal stuff.
Yet, though she had previously done Jewish-themed artwork, she had never experienced anti-Semitism beyond what she saw on TV or read about in books.
The Jan. 6 attack on the U.S. Capitol changed all that.
“The insurrection really skyrocketed my wanting to do this project,” she said. “Before, I was making work about medical experiments in the Holocaust and I was doing research about historical anti-Semitism, but it wasn’t as connected to me.”
Doctrow described her project as “a collection of comics that are also working as poems,” the purpose being to “confront people with their own biases.”
The recipes make for disturbing reading.
For instance, the ingredients for making people blindly follow you include: “a lukewarm glass of charisma, an ice-cold glass of manipulation, a good eye, a few million blindfolds and a dash of fear.” Approximate cooking time is four years.
She then goes through a step-by-step cooking process of easily targeting manipulatable people, spreading fear of minorities among followers, adding the manipulation by “comforting your panicked followers about the fear you mongered,” then lying to the followers to see if they believe what they are told.
Most of the recipes could apply to any minority. Only one is overtly Jewish: How to Hide Your Judaism. Its steps include erasing from your planner anything that includes Jewish affiliations, tucking necklaces with Jewish symbols under your shirt, and deleting from your phone any obvious keywords or messages alluding to your religion.
“Pour a large portion of Acceptance into your life,” the recipe concludes. “That will help you come to terms with hiding your Judaism on a regular basis.”
The idea for the project came when Harway, a poet and professor of English, gave her class a “prompt” to write a recipe that was not about food.
“I really loved the idea of an instructional poem,” Doctrow said.
Visually, the project’s prints are brutally truthful. Some depict Skinheads and Alt Right supporters brandishing swastikas and confederate flags. Another shows a crowd of Donald Trump supporters holding posters saying, “Stop the Steal.” Another shows a bowl of narcissism being poured into a body that resembles Trump.
“I have a really weird sense of humor,” Doctrow said. “All my work and my art and my poems, they’re very, like, dark, so I guess naturally it just kind of happened where I started adding this satirical tone to it.”
Kim Miller, chair of new studio practice and fine art at MIAD, sees Doctrow’s humor as a vehicle for bringing the worst of anti-Semitism – the Holocaust – into sharp view.
“Ally positions the humorous and the everyday against unimaginable destruction,” Miller said. “She plots the steps towards HaShoah in the mundane language of a recipe someone could follow. This brings the horror to the forefront, as well as reminding an audience that the potential for it to happen again is always present.”
Reaction to the project has been limited, though Doctrow did exhibit a poster at her school’s exhibition, advertising how to access it, and decorated it with graphic images of a skinhead, a swastika and the confederate flag.
“They almost didn’t let me put it in the show because of possible backlash in using symbols [that] might be misinterpreted as hate,” she said, “but it’s obviously not meant to be pro-Nazi or anything. The satirical nature of it is just making fun of those types of people.”
She does not intend to offend people with her art, she added.
“I want to start a conversation; that’s the goal of the project,” Doctrow said. “I hope people know that my intention is not negative, and it’s not to offend anybody. It’s just meant to highlight the truth.”

JCRC Scene Matt Goldberg Whenever there is a war between Israel and the Palestinians, there are no winners or losers, only victims. This latest round was no different. Prior to this last round of fighting, there had been an understanding …