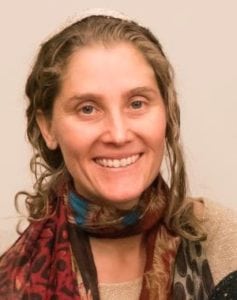 Rabbi Susan Goldberg, script consultant for the critically acclaimed TV series, Transparent, will be in Louisville Sunday, November 12, to speak about the show’s spiritual elements.
The Jewish Heritage Fund for Excellence is sponsoring Goldberg, who will speak at 1 p.m. that day in the Chao Auditorium, Ekstrom Library, on the University of Louisville campus. The title of her talk is “In the Wilderness: The   Spiritual Journey of ‘Transparent.’”
She will talk about how the show has grappled with portraying modern Jewish life as well as raising the profile of transgender people in popular culture.
Transparent, which premiered in 2014 on Amazon, is the story of a Los Angeles family coping with the news that its father and husband, Morton Pfefferman, played by Jeffrey Tambor, is transgender.
The main characters in the series are Jewish and the themes it addresses are culturally Jewish.
Transparent won a Golden Globe Award in 2015 for best television series, and Tambor won for best actor in a television series that same year.
A former dancer-choreographer, Goldberg is now a spiritual leader at the Wilshire Boulevard Temple in Los Angeles.
She is the second of two speakers connected with the show to speak here. A producer of Transparent, Zackary Drucker, was at UofL on October 17 to address the challenges and advances of increasing transgender visibility in contemporary media.
The event is free, but reservations are requested by emailing ranen.omersherman@louisville.edu.
In addition to JHFE, UofL’s comparative humanities department also is sponsoring the program.