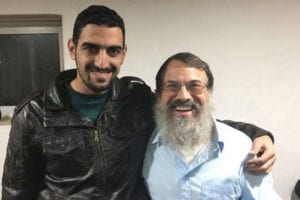 Hanan Schlesinger is an Orthodox rabbi, and a settler living on the West Bank of Israel.
Shadi Abu Awwad is a Palestinian student and activist, also from the West Bank.
You may not think they would have much in common, but they’re coming to Louisville in November to prove you wrong.
Schlesinger and Awwad are members of Roots, a grassroots collaboration of Palestinians and Israelis to build a model for coexistence. Their mission is to nurture understanding, non-violence and personal transformation.
The two will speak about their work at a Nov. 10 program at The Temple. Dinner will start at 6 p.m., followed by the program at 7 p.m.
“When we think of an Israeli Settler, especially an Orthodox rabbi, we think of an extremist, not a peace activist,” said Rabbi David Ariel-Joel of The Temple. “And yet, we are going to meet one who is part of a movement of Jewish settlers and Palestinians who are trying to change the bitter reality on the ground by working together to educate and to create a new reality; a reality of hope and peace.”
Originally from New York, Schlesinger, who lives in Alon Shvut, southwest of Jerusalem, is a founder of Roots and currently serves as its director of international relations. Prior to Roots, he taught Jewish studies at various seminaries and colleges, as well as the Pardes Institute in Jerusalem. He spent two years in the Judaic Fellows Program in Boca Raton, Florida, and over 10 years in Dallas Texas as rosh kollel (head of school) of the Community Kollel and later as founder and executive director and community rabbinic scholar for the Jewish Studies Initiative of North Texas.

Awwad, 27, a resident of Beit Ummar, near Hebron, and a leader of the roots youth group, is a recipient of the Roots scholarship and is a university student in Bethlehem. Though he was imbued with hatred of Israel at a young age, his family underwent a transformation, becoming leaders of a Palestinian movement for reconciliation with the Jewish state.
Founded in 2014, Roots works primarily among those who have traditionally been marginalized by, threatened by, and opposed to peace and compromise: religious settlers, religious Muslims, and veterans of the Palestinian armed resistance. They have found that through these programs:
• Each side discovers the humanity of the other, overcoming suspicion and building trust.
• Tensions ease, improving life on the ground.
• Perspectives are transformed, creating the foundation from which peace can sprout.
The Palestinians and Israelis involved in Roots do not hide the many deep disagreements between them. They are profoundly aware of the complexities of the conflict and of the lack of equality between the two sides. What unites them is their honest search for human understanding and nonviolent resolution to the conflict.
In addition to The Temple, Temple Shalom, JCRC, Interfaith Paths to Peace and Middletown Christian Church are co-sponsoring Awwad and Schlesinger’s visit to Louisville.