It won’t take a “Spoon Full of Sugar” for Disney’s Mary Poppins to go down. CenterStage presents the movie turned musical March 16-April 2 at the Linker Auditorium at the Jewish Community Center. Tickets are $20-22 in advance or $22-24 at the door and can be purchased by calling 502-238-2709 or online at www.CenterStageJCC.org.

After losing yet another nanny, the Banks family finds themselves in turmoil until a new nanny appears in the most peculiar way. The practically perfect Mary Poppins teaches the Banks family, and especially Bert, that “anything can happen if you let it!” 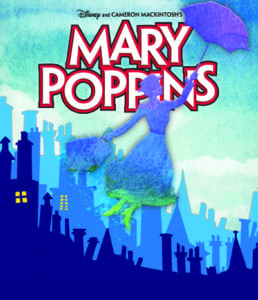 Mary Poppins features the music and lyrics of Richard and Robert Sherman. And was based on the book by Julian Fellowes and the stories of P.L. Travers. Additional songs and music were written by George Stiles and Anthony Drewe. The theatre production was co-created by Carmeron Mackintosh when it debuted in London in 2004 before moving to Broadway in 2006. The production was nominated for several Tony Awards including Best Musical and won the award for Best Scenic Design.

The CenterStage season ends with Sondheim on Sondheim, May 11-21. Tickets for all shows are on sale at www.CenterStageJCC.org.

Long before Marianne Zickuhr came to work at The J, she was already a well-known face around the center. She appeared in several CenterStage productions including, Big Fish and Rocky Horror Picture Show. (She’s especially proud of the latter, noting …