Members of Louisville’s black and Jewish communities came together at The Temple, Friday, Jan. 13, to remember slain civil rights leader Martin Luther King Jr. and to remind one another how freedom and equality are not just ideas; they’re God-given rights.

The 28th annual Martin Luther King Jr. Shabbat included The Temple’s Shir Chadash choir, which freshened up the Shabbat liturgy by including We Shall Overcome and singing Mi Chamocha to the tune of Go Down Moses. 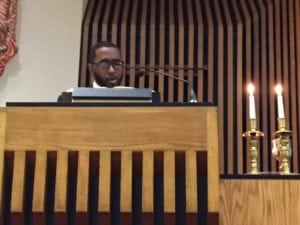 But the highlight of the service was the guest speaker, Pastor Bishop Michael Priester, spiritual leader of the Promised Land Baptist Church for 23 years.

Referring repeatedly to the Book of Job, Priester spoke of “rising from the dust and ashes,” saying people who have accomplished much in the past can do so again.

“As we look forward to this New Year, we’re faced with many obstacles and barriers, vicissitudes of life that challenge us,” Priester said. “There are unseen things before us, but with confidence and faith we’re able to move forward and deal with things that we are not aware of because we have hope in God.”

“Sometimes, in order to look forward you must look back,” Priester continued. “I have learned in life that you cannot leap from one mountain to another. Both geographically and gravitationally, we must experience some valley moments; there must be some valley time. If we don’t have valley moments we cannot appreciate the mountaintop experiences.”

He never referred to President-elect Donald Trump, but he did touch on the political climate and how African-Americans are viewed.

“We will have times when we are in the dust; it looks like it politically now. It looks like we’re in the dust. It looks like we’re faced with some things that we don’t have any answer to.… And there are those who have been marginalized and left for dead, forgotten. It seems to be that there are those who sit in positions of power of prestige that feel that certain people will not be able to make it because of where they come from.”

But he continued, “I have discovered it is not where you come from, it is what you come with that makes a difference.”

He used the pulpit to pay tribute to black-Jewish cooperation in Louisville.

“As we look back at African-Americans, as we look back at the Jewish community, the unique relationship that was woven together. I could not have started tonight to thank you for your commitment to the Promised Land Baptist Church and to the African-American community, and the networking that we have been able to do together throughout the years,” Priester said. “My friends, we continue to rekindle those things, to set examples of how people can work together even though they are from different backgrounds.”

“Even when we have differences,” he concluded, “we have to be able to make a difference in the world.”

(JTA) — Super Bowl LI will feature teams with Jewish owners for the first time since 2012. Robert Kraft will see his New England Patriots, the American Football Conference champions, in the big game for the seventh time since 2000. …

Esther Hillesum and Anne Frank had much in common. They were both Jewish, living in Holland, and they used their diaries to write about what they saw and felt during the dark days of the Holocaust. They also died in …