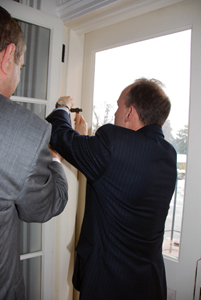 [By Michelle Effron Miller] [Photos thanks to JTA]

DOVER, Del. (Jewish Voice) — Woodburn, the governor’s mansion in Dover, is a place rich with history. Built in 1798 by Charles Hillyard III, the home has been owned by gentlemen farmers, two doctors, a dentist, a judge, an abolitionist, two U.S. senators and eight Delaware governors.

It is believed that as part of the Underground Railroad, the mansion’s secretive closets hid slaves seeking freedom.
Seeking his own religious freedom, Delaware’s first Jewish governor left his indelible mark on Woodburn by affixing a mezuzah to the parlor doorframe.

“I do this for the kids at the Albert Einstein Academy, for Jewish kids around the state, and for all children,” Gov. Jack Markell told a standing room only crowd on Feb. 23. “To see a mezuzah hanging at the governor’s mansion in Dover is a pretty amazing thing.”

During the ceremony, Engelmann talked of the symbolic importance of the day not only for Delaware’s Jews, but for Jews around the world.

“My relatives left Europe just ahead of the Nazis. We have children of Holocaust survivors here today,” Engelmann said. “To think about where we came from, to affix a mezuzah to the executive mansion of one of the 50 states of the wealthiest country in the world speaks well of the country. This is a joyous occasion.”

Saks said that historically when Jews rose to a position of power, they typically hid their Jewish identity or downplayed it altogether.

“Only in America would you have a governor put a mezuzah on the door and publicly do so,” he said.

Commenting on the meaning of the mezuzah, a small case containing a scroll of parchment with two chapters from the Torah, Saks said that some people mistakenly believe it is a good luck amulet. The mezuzah, he explained, comes from the story of Exodus.

“When God struck down the Egyptians, he told the Israelites to place the blood of a paschal lamb on the doorpost,” Saks said. “So when God ‘passed over’ he would know this is an Israelite’s home and this is an Egyptian home.

“But does God really need a marking on the door to tell Him who was Egyptian and who was an Israelite? No. It was a symbol for the Jewish people. They were being reminded that they were being freed to do the will of God. So to you, Governor Markell, I say ‘yasher koach’ for following in the footsteps of your ancestors and publicly proclaiming that you’re Jewish. And that mezuzah will remind you that you have been elevated to that position to continue God’s work, making Delaware a better place.”

Grumbacher, of the governor’s synagogue and a longtime family friend, helped Markell affix the mezuzah in place. The son of a Holocaust survivor, Grumbacher said that “This speaks volumes of a country that would elect a Jew as governor and an African American as president.”

The mezuzah, which literally means “doorpost,” is traditionally hung on the doorposts of Jewish homes as a reminder of the commandments. Th governor’s mezuzah was given to Markell as an inauguration gift.

Markell is not the first governor to hang a mezuzah. In 2007, according to the Associated Press, Florida Gov. Charlie Crist put a mezuzah on his office door at the state capitol in Tallahassee.

The Delaware mezuzah could be the first affixed to a U.S. governor’s mansion.