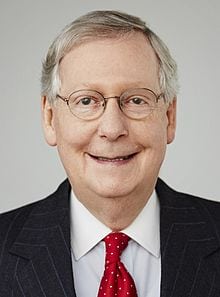 WASHINGTON — Democratic and Republican congressional leaders tussled on the AIPAC stage on the final day of its policy conference over which party’s prescriptions were better for Israel.

The display of partisanship on Tuesday morning, hours before pro-Israel activists headed to the Capitol to lobby for their issues, was an extraordinary moment for the annual policy conference of the American Israel Public Affairs Committee, where bipartisan comity has always been a paramount aim.

The partisan splits illustrated the struggles of the lobbying giant as it seeks to reconcile increasingly divided notions of what it means to be pro-Israel. Traditionally, the final day of the conference features leaders of both parties saying that if they agree on little else, they agree on how to be pro-Israel — through working with AIPAC.

But the opening speech by Sen. Mitch McConnell, R-Ky., was a jeremiad against the policies of former President Barack Obama that the Senate majority leader said had left the U.S.-Israel alliance frayed and Israel less secure.

“We’ve got to rebuild our partnerships,” McConnell said. “The past eight years gave witness to a serial degrading of our alliances and partnerships all across the globe.”

He said the Iran nuclear deal reached by Obama, which swapped sanctions relief for a rollback of Iran’s nuclear program, had emboldened Iran, in part because Obama’s preoccupation with preserving the pact diminished the will to confront the Islamic Republic.

McConnell said Iran needed concrete examples of how it would be penalized if it launched a weaponized nuclear program, and pledged to lead Congress in an authorization of force in that instance.

He also pitched President Donald Trump’s proposal to increase the military budget, although the Kentucky lawmaker did not address one of AIPAC’s three legislative asks — namely sustaining the budget for overall foreign assistance against Trump’s proposal to slash it by nearly a third.

AIPAC has long argued that assistance to Israel, which Trump wants to maintain at current levels, should never be separated from foreign assistance. Foreign assistance is a positive way to project U.S. power, the lobby says, and helps open doors for Israel in countries that might otherwise be wary of ties with the Jewish state.

Calls to sustain that assistance were central to the speeches of the Democratic leaders who spoke: Sen. Charles Schumer, D-N.Y., the minority leader in the Senate, and Pelosi, the House minority leader.

Pelosi cast support for foreign assistance as fulfilling a responsibility to Israel.

“A strong America in the world is good for Israel,” she said. “I fiercely oppose proposals that would slash our State Department funding by 28 percent.” 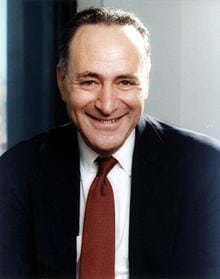 Both Democrats took shots at Trump’s alliance with leaders of the far right, including his appointment of Stephen Bannon, the former publisher of Breitbart News, which he himself called a “platform” for the alt- or anti-establishment right.

“There are some who would retreat from the world stage,” he said. “They even borrow from Charles Lindbergh.”

The aviator led the World War II-era anti-Semitic America First movement; Trump has embraced “America First” as one of his slogans.

Schumer joined a multitude of speakers, both Democrats and Republicans, who decried the Obama administration’s decision in its final days to allow a U.N. Security Council resolution condemning Israel’s settlements.

“The United States should have vetoed Resolution 2334 in December and it should never use the United Nations as a forum to put pressure on Israel for any kind of agreement,” he said to thunderous applause.

But where Schumer was uncharacteristically restrained in criticizing the new administration and defending the past one, Pelosi was robust. She decried Trump’s “presidential campaign with hate speech that went unchallenged, an atmosphere that emboldened anti-Semites to desecrate Jewish cemeteries, white supremacists that feel emboldened and connected to the White House.”

Pelosi, like other Democrats who spoke throughout the conference, emphasized two states as the preferred outcome to the Israeli-Palestinian conflict. Republicans pulled support for two states from their platform last year, and Trump earlier this year said he was agnostic on the issue, ending 15 years of U.S. policy favoring the solution.

But Pelosi took it a step further, taking out her phone to read out loud a letter sent last week asking Trump to reaffirm U.S. support for two states, emphasizing twice that the vast majority – 189 of its 191 signatories — were Democrats.

What she left unmentioned was that J Street drafted and lobbied for the letter; AIPAC did not have a position on it.

“I wanted you to hear it as written, not out of context. I wanted to read it to you in the spirit of strong support for a Jewish, secure and democratic Israel,” Pelosi said, borrowing rhetoric J Street might easily use. “An Israel that recognizes the dignity and security of the Israelis and Palestinians.”

That line earned her moderate applause.

AIPAC has been trying, after years of its own tensions with the Obama administration, to reassert its bipartisan profile and hold on to the ground between  pro-Israel groups that appear to gravitate to the Democrats (J Street) or Republicans (the Zionist Organization of America).

Its three legislative asks, while crafted to earn support from both parties, do not include mention of two states. (All speakers endorsed the legislative agenda, which in addition to sustaining foreign aid backed bills that would add non-nuclear sanctions on Iran and impose fines on businesses for cooperating with the Boycott, Divestment and Sanctions movement targeting Israel.)

The two-state notion persists in AIPAC policy. Its executive director, Howard Kohr, on Sunday evening envisioned “a Jewish state of Israel living side by side in security with a demilitarized Palestinian state.”

But it is nowhere near front and center as it is with other centrist Jewish groups like the American Jewish Committee and the Anti-Defamation League, each alarmed by erosion for support for the outcome among Republicans in the United States as well as in Israel’s government.

Rabbi Rick Jacobs, who leads the Union for Reform Judaism and was at the conference, said failing to robustly defend two states undercut AIPAC’s mission to combat BDS.

“Without a strong commitment to two states, it’s pretty hard to work on BDS,” he said. “The only way you fight BDS” on campuses and in churches “is to say it is undermining the two-state solution.”