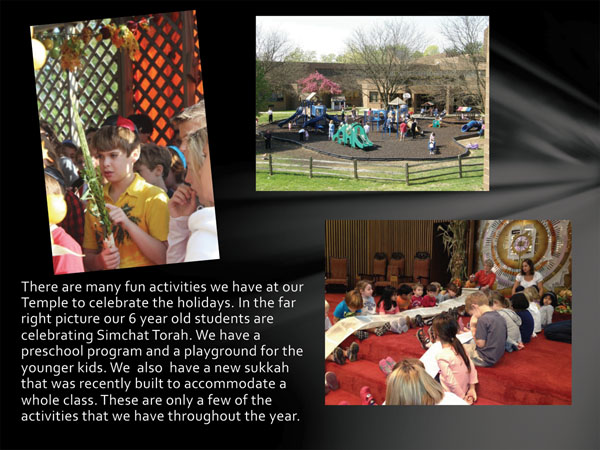 When technology turns a classroom into a place where students connect with others their own age on the other side of the ocean, and lets them discover that kids in Louisville are not so different from kids in Israel and they really do have things they can share and talk about, it is something special.

That’s exactly what’s happening this year with seventh and eighth graders in The Temple’s Sunday School and the students at Sulam Tsor in Rosh Hanikra, a small community in Israel’s Western Galilee region located on the Mediterranean coast at Israel’s border with Lebanon.

The Temple Religious School Principal Joyce Eiseman and teacher Bernard Pincus are both enthusiastic about this Partnership 2Gether project and are please with the pairing of the two schools.

Using the internet, the classes exchange PowerPoint presentations with photos and short messages so the students can get to know each other, and they can communicate via email.

Since The Temple offers the class as one of its 6-week sessions, there isn’t a lot of class time for developing friendships, but the potential is there for students to pursue the connections on their own time after they’ve finished their class.

Toward the end of the year, Eiseman and Pincus plan to gather all the students who take the class for a special finale.

Johnson has agreed to call her class together on a Sunday afternoon in Israel and the two groups will attempt a video call via Skype.

“The kids are pretty excited about the program,” Pincus said. “They get to see how the other kids … live. It’s very meaningful.”

“Last Sunday, we talked about the potential war and the geography of Israel,” he continued, noting that at its narrowest point, Israel is only nine miles wide – about the distance from the Snyder Freeway to downtown Louisville.”

“Even though they’re so far away,” Pincus observed, “they’re interested in the same things. Before we did this project, they were not necessarily aware of it.”

This twinning project is part of Partnership 2Gether, and this particular pairing began when Eran El-Bar, the Jewish Agency for Israel’s Partnership director for the Western Galilee and the Midwest Consortium, visited Louisville in July.

Louisville has been part of the Partnership program and the Midwest Consortium since its inception in 1997. The program has led to exchanges and cooperation in a number of areas, including arts, education and medicine, and it fosters the development of personal relationships between people in the Western Galilee and those in Midwest Consortium communities, including Louisville.

[by Phyllis Shaikun] In February 2010, the Jewish Hospital organization launched the JHHS Louisville Jewish Community Excellence Grants initiative as part of its historic support of the hospital’s founding community. The program was created as a funding source to provide …

Louisville, Ky. (WHAS) – A pro-Palestinian protest took place on the corners at Bardstown Road in Louisville’s Highland’s. It was to bring awareness to the ongoing tension in the Middle East, particularly with Israel and Palestine. There were people of …

Opportunities for hands-on involvement making the holiday season brighter for those in need. Some projects need help immediately.  Check the dates! RSVP to Amy Benovitz at 425-0373. 1) NOW: Winter clothing/furniture drive. With cold weather starting, agencies are looking for …