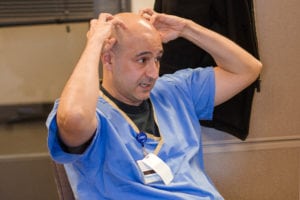 Dr. Ian Mutchnick first met little Leyan Albazzour in 2015 at a clinic in the West Bank. He didn’t like what he saw.
Children her age normally have openings in the growth plates of their skulls to permit brain development.
“Hers were all fused,” the Jewish neurosurgeon from Louisville said. “She did not have the normal gaps between them, so her skull could not grow big enough to adequately allow her brain to develop.”
Left untreated, he said, pressure would continue to increase in her skull and probably shorten her life.
The condition is called Apert syndrome, which results in pansynostosis (fused skull plates). In the United States and other Western nations, children born with it undergo surgery within the first six months of life.
Leyan was already 7 years old.
That was in 2015. This month, Leyan, now 9, and her mother, Montaha, arrived in Louisville for an infrequently done surgery at Norton Children’s Hospital to expand her skull volume and give Leyan a chance for a better life.
“We can’t make up for the nine lost years,” Mutchnick said, “but we can make the rest of her cognitive development go better.”
The operation, which was successfully performed Wednesday, January 10, is called a cranial vault expansion. Mutchnick detached a large portion of Leyan’s back skull from the front, replacing it with two “distractors,” which create space to relieve pressure on Leyan’s brain, permitting it grow.
Every night for two weeks, Leyan’s mother must use a special screw driver to make three full rotations of the distractors.
It’s painful for Leyan, who must endure the distractions, and for Montaha, who must turn the screwdriver.
“Every time you’re turning those, you are pushing the distractors a little farther apart,” Mutchnick said, “and that’s making the skull case bigger.”
To Mutchnick’s knowledge, Leyan is the first Palestinian child to come to Louisville for medical treatment.
Almost certainly, she is the first to be treated here by a Jewish physician.
But she may not be the last.

Mutchnick first heard of the Palestinian Childrens Relief Fund in 2013. Founded by an Ohio journalist and his wife, PCRF gets children to hospitals in developed countries for medical care they simply can’t receive at home.
“They have operations throughout the trouble spots in the Middle East, whether it’s Iraq, Syria or Gaza,” said Mazen Masri, a Louisville area businessman and the local coordinator for PCRF. “They identify kids who are not receiving life-saving treatment in their own backyards.”
They also raise funds to provide medical care, though physicians often waive their fees.
The PCRF sends 40-50 children abroad per year, according to Dunia Saed, its patient affairs coordinator. PCRF handles the visas, flights, arrangements with hospitals and on-ground volunteer support for the families.
“It sometimes takes over your life,” Saed said, “but to help these kids, it’s all worth it.”
PCRF also brings physicians to the region for a week at a time to provide treatment not otherwise available there, she added.
Mutchnick was one of them. He has made two trips to the Palestinian areas – Ramallah in 2015 and Gaza in 2017 – to perform procedures and work at clinics there.
Masri’s job is to provide social support Leyan and her mother while they are in Louisville at the Ronald McDonald House. Members of the Arab community here have volunteered to act as interpreters, cook meals and just be an extended family.
“They don’t speak English; they haven’t traveled far outside their village (near Jenin),” Masri said. “My mission and that of the PCRF here is to provide them with emotional and social support they need while they’re here because they’re going to be here for a long time.”
In fact, they could be here six to eight weeks.
“We’re going to have volunteers checking with them on a daily basis, at least to give them someone to speak with, and to introduce kids to Leyan and give them the opportunity to play.”
Montaha, who does not speak English, could not be reached for comment on Leyan’s care.
Mutchnick is impressed by PCRF and the work it does.
“This organization not only brings children to western countries to receive care, they bring doctors to the occupied territories – or the disputed territories, however you like to put it – for care,” Mutchnick said.
They have also started to build up infrastructure, building a pediatric oncology center and creating more capacity within the disputed territories to care for children.
“I found them to be more than a little impressive,” Mutchnick said. “To dodge the political problems as well as surmount the logistical barriers to do what they do, they do both exceedingly well.”
Masri, who is in the process of establishing a PCRF chapter in Louisville, hopes Leyan is the first of many Palestinian children to come here for medical care.
“This is a test case,” he said. “And this community has a great history of interfaith organizations and groups coming together for things like this. We want to continue to do this.”

Leyan could make a return trip to Louisville to correct other problems caused by her condition.
“Every night, she’s basically starved of oxygen for a good amount of the time; she has constructive apnea,” Mutchnick said. “This is just part one. Part two would be a big facial operation where we disconnect the front of her facial bones and we distract those out more to increase the airways space.”
In fact, she could undergo even more procedures than that, according to Saed.
“She has four surgeries – two life-changing and two cosmetic that will be taken care of later in life when she’s a little older.”
So, will she be back?
“Nothing is definite when it involves tens of thousands of dollars,” Mutchnick said, “but there is an intention to bring her back for part two.”
As Leyan recovers from her surgery, one question remains: Why couldn’t this procedure be done in Israel which, after all, has history of treating Arab patients from West Bank, Gaza and even Syria.
In fact, according to Mutchnick, Israel has an oversupply of pediatric neurosurgeons who are qualified to treat Leyan’s condition.
So why didn’t they?
There are probably political, financial and bureaucratic reasons why, yet neither Mutchnick nor Masri could give a definitive answer.
“I tried to find that out,” Mutchnick said. “It would be an everyone-wins kind of thing if the kids who needed treatment could get treatment easily in Israel.
“I’m sure there’s a financial part to it,” he added, “but even after discussing it with Steve Sosebee (the president and CEO of PCRF) and with [a] senior pediatric neurosurgeon in Israel … I still could not give you an answer about why this is an issue. Why do we have two sequestered areas of undersupply in a country that has relative oversupply? I don’t know if I have an answer for you, and I would love to know.”