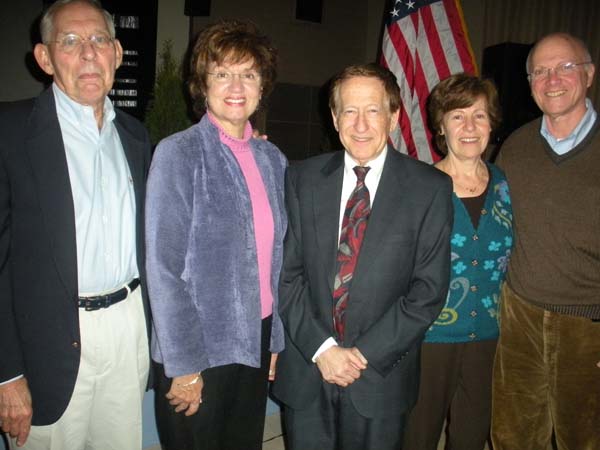 Rabbi Michael Cook, Ph.D., this year’s Goldstein/Leibson Scholar-in-Residence, drew a sizable crowd to his lecture on Sunday, March 27, at the Jewish Community Center. A professor of New Testament and early Christian Literatures on the graduate and rabbinical seminary level for several decades at Hebrew Union College-Jewish Institute of Religion (HUC-JIR) in Cincinnati, he holds the Sol and Arlene Bronstein Professorship in Judaeo-Christian Studies. He also is the author of the book, Modern Jews Engage The New Testament: Enhancing Jewish Well-Being in a Christian Environment.

Cook contends it is important for Jews to be knowledgeable about the New Testament because they are living in Christian-influenced world. While Jews have been told through the ages not to approach the New Testament or its writings, he says “we live in a secular society where Jews know and debate about everything but the Christian bible and are ill-prepared to answer questions [challenging our beliefs] posed to us by our non-Jewish neighbors.”

As a freshman at Haverford College, a small Quaker-founded school near Philadelphia, Cook was asked by an elder of the Quaker church to learn about the New Testament. He became the first-ever Jewish student to sign up for the course, and was shocked to find that many of the parables attributed to Jesus parallel to those in the Jewish Bible. In fact, he notes, the Lord’s Prayer mirrors the Aramaic words of the Kaddish.

While in school, he read a book about a Bavarian hamlet that put on a Passion Play each year and saw photos of two women standing by Jesus on the cross: one was blindfolded and disheveled (and labeled “Synagoga”) while the other was clear-eyed and in command (labeled “Ecclesia”). The implication was that the Jews were blind to Christian teachings while the church was all-knowing. He found himself memorizing portions of the New Testament to enable himself to engage in discussions about religion with his non-Jewish friends.

Cook eventually developed the term “Gospel Dynamics” to identify the skillful techniques that were molded in tradition to answer the questions early Christians raised decades after Jesus’ death in regard to the immaculate conception, the second coming, etc. “If you can learn what Gospel Dynamics is,” says Cook, “you know more than most Christians do about their faith.” He encourages his fellow Jews to take that first step and embark on a journey of learning about the Christian Bible so they can be informed enough to respond when someone asks them a leading question.

He went on to share some amusing anecdotes from his time as a congregational rabbi about the lengths some people will go to avoid taking that path. One member of his synagogue voiced concern when a Christian neighbor gave her son a copy of a bible that contained writings from both the Old and New Testaments. She solved the problem by ripping out the last 75 pages of the text! He also heard about a mother and child who passed a crèche at Christmastime. The child asked who the baby was, and the mother responded “Baby Judah Maccabee.”.

Cook’s approach: know enough to be able to answer difficult questions honestly for your children and yourself. “We used to drive our children to see Christmas lights during the holidays,” he recalled. “We explained that Jesus did A, B and C, but not X, Y and Z, which is why we can’t celebrate the holiday – and they were okay with it.”

The Goldstein/Leibson Scholar-In-Residence program presents nationally recognized scholars and educators who lecture on a variety of Jewish themes and subject matters. The program is underwritten by funds established at the JCC and the JCL’s Foundation for Planned Giving by Nicole and David Goldstein and Phyllis and David Leibson.