Though one of the greatest novelists Israel has produced, David Grossman is no one’s idea of a stand-up comic. 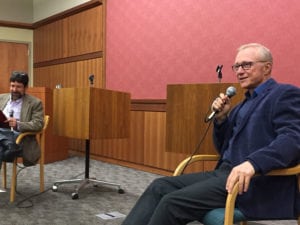 Israeli novelist David Grossman (right) took questions about his work during a March 7 forum at the University of Louisville. Professor Ranen Omer-Sherman, JHFE chair for Judaic studies at UofL, acted as moderator.

Yet Grossman, who took questions at a March 7 forum at the University of Louisville, made such a comic the main character of his latest novel, A Horse Walks Into a Bar, the story of a funnyman who can’t fake it anymore.

The story centers around one evening’s performance at a nightclub in a small Israeli town where an aging comedian, Dov Greenstein, meets a boyhood friend in the audience, District Court Justice Avishai Lazar, among other past acquaintances in the crowd.

As the night progresses, Dov’s monologue becomes a confession of sorts as his jokes give way to uncomfortable stories about his past, including one difficult a week at a military camp for youth.

None of these digressions are funny to the increasingly restless audience.

But in talking questions for the capacity crowd at the Chao Auditorium at the Ekstrom Library, Grossman challenged his audience to look at comics in a different way.

“Even in the extermination camps there were funny men,” he said. “This is such an act of liberty, of freedom. They might have been murdered an hour later, and yet by changing the point of view, they weren’t exactly passive victims.”

So it was for Dov, the author said. He wanted that act of freedom, too. Instead of his normal routine, “he tells another story – let’s say the real story – of his life. It bursts out of him,” Grossman told the capacity crowd. “Suddenly, it’s a new reality.”

Taking questions from JHFE Chair for Judaic Studies Ranen Omer-Sherman, who moderated the program, Grossman spent an hour reflecting on how he researches his work, what motivates him, and what influences his writing.

For instance, he loves to get out and do first-hand research for his books, whether that takes him to the West Bank or the Israel Trail, which runs the length of the country.

I like these periods of research,” he said. “They take me away from my desk. I spend much of my, life in one room.”

There can be rewarding moments during this resaerch, such as the time on the Israel Trail — scene of the novel To the End of the Land — when a hiker he met broke open his backpack to show Grossman a worn copy of one of his books.

A secular Israeli and a self-described atheist, Grossman nevertheless loves Hebrew, the language in which he writes. If Abraham could come back to life and join him at his dinner table, he said, the patriarch could probably understand much of the conversation.

Though he lamented that many people cannot read his work in its original form, he considers it an “honor” to write in Hebrew.

“It’s a good feeling to write in this language,” Grossman said.

The program began with a performance artist reading lines from A Horse Walks Into a Bar and ended with Grossman autographing copies of the book.

Omer-Sherman couldn’t resist ending the program by asking Grossman about politics ­– a touchy subject these days in Israel, the author said.

Outspoken on the Israeli-Palestinian situation, Grossman acknowledged the hatred for his country in the Arab the world and the need for a strong army to defend the Jewish state.

Burt Israel’s future depends upon more than a strong army, he said, warning that too many of his fellow Israelis have grown too comfortable with the status quo.

“If you occupy a people for 50 years, existentially, you start to think you’re superior to those people. This is the first crack in your democracy.”

I was recently skimming through the collected poetry of Wallace Stevens and stumbled upon one of his most famous poems, 13 Ways of Looking at a Blackbird. I understood most of it but had to look up #VII. Where was …

I love serving light foods that are naturally kosher for Passover. With so much matzah, vegetable and fish dishes are often a welcome addition in my home. In this holiday menu, my Coconut Carrot Soup is a creamy soup at …