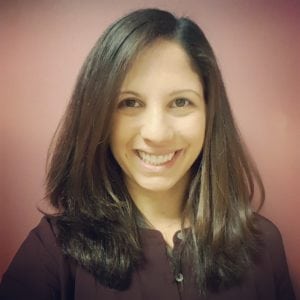 For Madelyn Cerra, building on the success of the PJ Library comes down to one word: programming.

PJ Library is more than a children’s book that shows up in one’s mail box each month, she said. It means live activities that dovetail with the titles.

She named the annual apple picking at Hidden Hollow Orchard, which corresponds with Rosh Hashanah, as one example. The kids pick apples, hear a shofar and listen to a story.

Problem is, not everyone knows that.

“I don’t think a lot of people realize that we offer the programs,” Cerra said. “We’re going to work on the communications piece, and part of that is coming up with programs that excite people and make them want to come out.”

Programming and promotion will be challenges for Cerra, a mother of two – Maggie and Josie – who was just hired to be The J’s new director of PJ Library and Shalom Baby.

Sponsored by the Harold Grinspoon Foundation, PJ Library sends free Jewish children’s books to families around the world every month, encouraging parents to read to their children and share tales of their Jewish heritage.

One goal Cerra has is for PJ Library to reach children as old as 13. She said it already offers diverse titles for more mature readers – stories about Jews of color, Russian-speaking Jews and interfaith families.

“They have books that expose us to all that; they’re really neat.”

To develop program to match the titles (and the holidays and subjects to which they relate) Cerra said she will rely heavily on a committee of volunteers chaired by Marsha Roth. But she said that panel needs to be expanded.

“We’re really looking forward to bringing some new people on the committee and coming up with some new and exciting programs,” she said.

As for Shalom Baby, the monthly music program for babies and toddlers, she wants to let families know it isn’t just for 1-year-olds anymore.

“I think it should be opened to all families who have little ones who may be interested,” she said.

For Cerra, both PJ Library and Shalom Baby are more than just jobs. Raised as a Catholic, she and her husband, Matthew, looked at the Catholic and Jewish communities in Louisville when deciding where their spiritual home would be

PJ Library and Shalom Baby opened doors for her, welcoming the whole family into the Jewish community.

“I was just looking to connect,” the Nashville native. “We were looking for something we could do as a family and connect with other Jewish families in the community, which is also my motivation going forward.”

Even today, she said she personally looks forward to the monthly PJ Library book. “I feel like I’m learning with my daughter.”