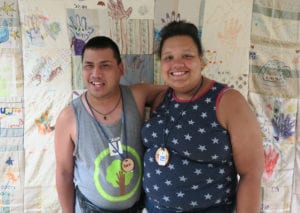 Ben Wright, seen here with his fiancee, McKinnley Hayes, is believed to be the first blind counselor at Camp J. (Community photo by Jessica Budnick)

Ben Wright was born blind, but that doesn’t mean he was born beaten.
Wright, who can see nothing more than light and dark, refuses to let his challenges keep him from the life he wants.
His single-minded determination is on display every weekday at Camp J, where Wright is a counselor, showing the kids how disabilities need not slow them down.
“I love seeing the kids get excited,” he said.
Born in the Philippines and adopted by an American family, Wright, who grew up in Illinois, has a degree in family services from Eastern Illinois University and has lived in Louisville for several years.
He worked for eight years as a house parent for the Kentucky School for the Blind, until they eliminated his position. Then he applied to Camp J through a job-posting website. He didn’t hear back, so he came to The J to talk to Camp Director Mindye Goldberg Mannel, who interviewed him “on the spot.”
Needless to say, he got the job.
“I started out working with the Young Leaders, which is our oldest campers,” Wright said, “but then Mindye decided that since I’m sort of a rarity – I’m the only blind person that’s ever come to work here – to share me with everybody.”
He works closely with Guni Saar, the camp’s music specialist and one of the two Israeli shlichim. He also works in Science and Nature, creating a program based on the senses. (They taught the kids what it’s like to be deaf and to try reading lips.)
“We’re going to take the kids on a blindfolded nature walk so they can describe what’s around them and have them listen with their ears to what they hear,” Wright said.
Having Wright on staff gives kids and counselors alike a fresh perspective on the camping experience, according to Mannel.
“They get to learn from him every day,” she said. “They learn about camp from his perspective using their other senses, just like Ben does.”
For example, Wright shows them how his iPhone 8 voiceover feature works, and the Braille machine, by which he can type a sentence into his phone and pins pop up to make a Braille sentence. This way, he can create texts, e-mail, whatever he wants.
He also does question-and-answer sessions with the campers about what it’s like to be blind.
“I’m not shy,” Wright said. “I’ve been asked any kind of question you could ever imagine.”
He works at Camp J with his fiancée, McKinnley Hayes, a Yachad advocate.
The Yachad campers, all of whom have disabilities, seem to have a special connection to him, Wright said.
“All the Yachad campers seem to [be] drawn to me,” he said. “I mean, all the kids are, but the Yachad campers seem to be more so.”
Wright met Hayes, whom he plans to marry in 11 months, when they were both working at Kentucky Lions Youth Camp in Lebanon Junction, a camp for visually impaired children.
He also is interested in theater and is a VIP season subscriber to CenterStage. He has performed on stage, too, doing voice acting in the Kentucky Printing House for the Blind’s Braille Theater.
“All the actors sit on stage and we do a dramatic reading of a play,” Wright said. “Sometimes we use gestures and the voice to make our characters come to life. So, it’s not just us reading it. We’ve spent two months of rehearsals getting ready,”
He also sang with Voices of Kentucky, an all-inclusive, mixed chorus.
Asked if Wright ever slows down, Hayes, his fiancée, vigorously shook her head.
“I tell him when he has to rest,” she said as Wright laughed.
When Camp J ends in August, Wright will be looking for another job. The couple plans to move to Henderson, Hayes’ hometown, after they marry.
For now, though, he’s enjoying Camp J.
“It’s been one of the best experiences I’ve had in a while,” he said. “I really, really enjoy getting to work with the kids and seeing the kids grow and have fun here at camp.”
“There’s so much to do,” he said of life in general. “I just don’t like to miss out. I don’t let my blindness stop me. Most people would sit at home and watch Jerry Springer all day and not go out and work.”