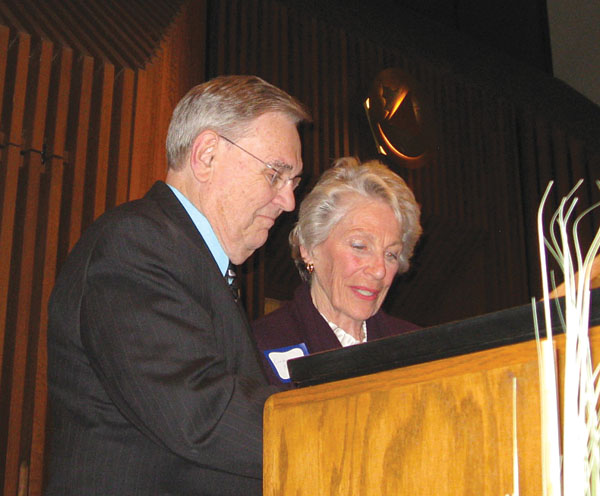 On Wednesday evening, November 14, the National Council of Jewish Women, Louisville Section, honored the memory of the late David Richart, a nationally recognized child advocate, long-time director and co-founder, together with NCJW, of Kentucky Youth Advocates, and founder of the National Institute on Children, Youth and Families, at the inaugural David Richart Pathway to Justice for Children event held at The Temple.

A standing-room-only crowd came to celebrate Richart’s legacy and to honor Kentucky House Member Tom Burch (District 30), a passionate advocate of securing protective services for abused and neglected children and the first recipient of the David Richart Justice for Children Award. Since 1973, NCJW has fought for the rights of children and families, and the organization was also responsible for teaching Richart about children’s rights. It was Burch, who was first elected in 1972, who helped Richart frame the issues in order to help children gain from them legislatively.

Yetter began by commenting on a recent Floyd County case where a four-year-old child was killed in the home of relatives who were supposed to have protected her. Judge Fitzgerald, who has been working in the field for over 30 years, commented that back in the early 1980s, most abuse cases involved parents exerting excessive corporal punishment against their children.

Then there were anti-abuse programs in place that worked, but now there is no money to keep those programs going and groups like Seven Counties are going out of business. She sees a correlation between the increase in poverty and the escalation of incidences of child abuse.

“When you go to the Kentucky Cabinet for Families and Children, you hear there ‘might be a problem,’” says Fleischaker, “but those issues remain hard to prove. Most individuals are reluctant to testify in court. I am called in when a death occurs, but I am frustrated that Kentucky has a closed records system where children and families are involved. There simply is no accountability, and there is no harder opponent than the Cabinet. We need everyone to help fight that fight and open those records in the legislature.”

Dienes commented there is new mandatory education for teachers to help them recognize abuse, but she feels similar education should also be mandatory for physicians and other healthcare professionals. “Babies don’t bruise,” she says, “so if you see a baby with a bruise, report it.”

Fox was asked if some parents are prone to be abusers. “Depends on who you talk to,” he responded. “Nationally 1.25 million kids are mistreated each year – that’s 148 children abused during the time you are attending this meeting. This country’s children are the most maltreated in the world, and adults who were abused tend to be higher abusers.”

“Richard Richart’s legacy is that he cared passionately about kids,” said Yetter. “He cared about passing legislation to protect children’s rights and we must fight to open the court systems.” Judge Fitzgerald agreed that many people do not have family or a stable back-up system to help them. “It is up to us in the community,” she said, “to fill that need.”

Following the discussion, Burch humbly accepted the David Richart Award and was truly moved by the tribute. “When I first started in the legislature,” he said, “children were thrown away like tin cans. I grew up in an abusive home and accepted it because judges at the time believed it was a family matter.”

Not anymore. Over the past 39 years, Burch has created numerous services for children and to protect women’s health, and says he is there for his constituents any time they need him. His early childhood development bill, HB 702, has improved the quality of child care and expanded health services for at-risk children from birth to school age, thereby increasing their opportunities to succeed both in school and in life.

Bring your family and friends to JCC’s Summer in Winter program Tuesday, December 25 from 10 a.m.-1 p.m. Have a blast with lots of fun family activities and still have time to go to the movies!Call 459-0660 to register. Register …

You can raise money for charity by joining a stationary bike challenge Dec. 9 at Jewish Community Center of Louisville, 3600 Dutchmans Lane. Riders will pedal for one to five hours as part of Cycle for Good, a fundraiser that …