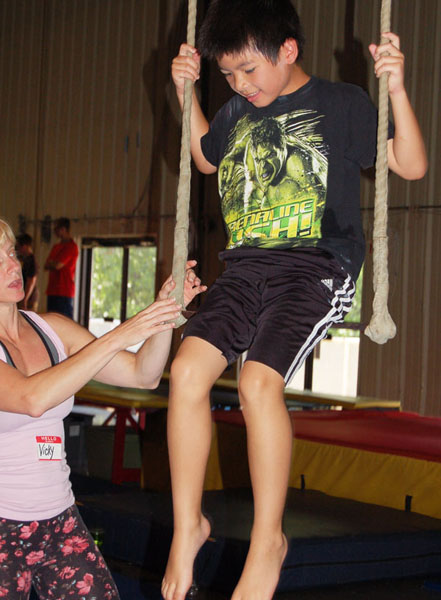 Small children sometimes have big fears. Monsters might be hiding under the bed. It’s dark inside the closet. Mom has cancer.

But at Gilda’s Club, kids can be with other kids who are on the same cancer journey, and feel more normal there than in any other place. And every summer, at Camp Gilda, they spend a week together in activities where living with cancer is not the focus of their lives.

Running Camp Gilda takes dozens of volunteers who do everything from chaperoning field trips to preparing meals and snacks for the more than 30 kids aged 6-11 at the weeklong day camp. For six years, volunteers from the National Council of Jewish Women (NCJW) have done the lion’s share of the work for Camp Gilda, which culminates in a community-wide carnival and fundraising activity.

The kids create their very own carnival (complete with game booths, cotton candy, ice cream, bouncy structures, a fire truck, dunking booth, and lots of food and prizes). They work shifts at the carnival and invite their family and friends to join in the fun – all while raising money for a cause. They vote on the charity to receive the funds each year and often go to present the check. This year, the children raised $1,700 for the cancer program Pay It Forward. The camp children always vote to “pay it forward,” giving the money to another charity to help its children in need.

The camp continues to reflect innovative programming that has become a benchmark not just for the program in Louisville, Kentucky, but for 58 plus Gilda’s affiliates around the United States and Canada. It is singly the most popular event with the youth membership. This year’s camp was held June 17-21.

This year’s theme was “3-Ring Circus at Camp Gilda!” From magic tricks to juggling, by week’s end the campers could perform a variety of circus acts designed to engage the body, mind and spirit. Children learned how to apply clown makeup one morning at camp then spent the afternoon at the Turner’s Club of Louisville as the staff there guided them through lessons in hula-hoop tricks, tumbling, trampoline and balance beam.

“While cancer is a large component of their lives, this camp lets kids be kids,” said Jennifer Beasley, youth program manager at Gilda’s Club. “Talk about juggling! Children whose lives have been affected by cancer tend to take on additional family responsibilities. This gives them a chance to let go of that for a while.”

Most campers come from the Louisville area, although some are staying with their families at the Ronald McDonald House while family members are being treated at Louisville-area hospitals. Some of the children are survivors of cancer, others have parents, siblings or other family members who are on a journey with cancer.

“I was blown away by how talented these kids were. I was inspired as I watched them learn all of the circus tricks,” commented Beasley. “But seeing the closeness develop between the children, watching the friendships form and noticing the gentle kindness they show each other is truly inspiring.”

Facilitated by three licensed mental health professionals, along with a team of volunteers (many of them NCJW members), the campers enjoy a wide variety of activities in the clubhouse from light exercise, games and cooking to dance, music and artistic expression. Each day also involves a trip to places like a local water park, an equine therapy barn, a ride down the river on an antique steamboat, a nature hike through a forest, picnic in a park, a visit to a hands-on organic farm (to taste vegetables right out of the ground, make bread from scratch, and dig for worms), Putt Putt golf, bowling, rock climbing or a refuel pit stop at an ice cream parlor. 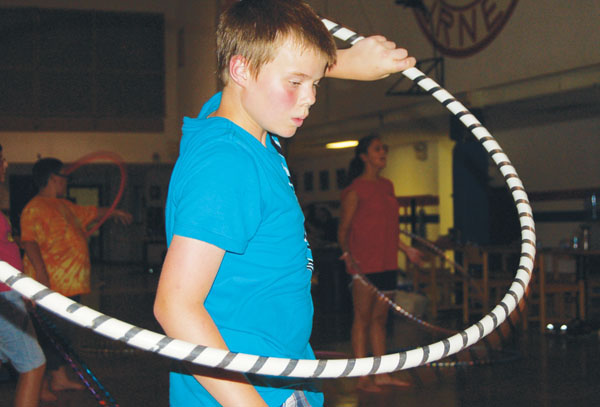 An important part of the camp each year is a visit with medical professionals who honestly and openly answer any question asked. This “Ask the Doc” encounter helps the children understand the treatment and side effects of the disease, for example, why do people who undergo radiation treatments frequently lose their hair? Because radiation targets fast-growing cells like hair follicles, hair-loss is a common side effect.

“We couldn’t do this camp if it were not for NCJW and the support they provide,” said Karen Morrison, CEO of Gilda’s Club. Last year NCJW expanded its support by organizing an outing for all of the campers and their families aboard the Belle of Louisville. The event brought together participants from all past years of Camp Gilda for a five-year reunion.

“Judy Shapira, who is one of our founding board members, created the partnership with NCJW six years ago. We knew we wanted to expand our programming for children and they stepped up as our primary sponsor for Camp Gilda,” said Morrison. “The initial two years of support were at the $5,000 level. Recent years have been at the $7,000 level (due to the camp’s growth in both activities and the number of youth participating).”

According to Shapira, this project “is a win-win for all of us: it’s a fabulous way for our women to enjoy hands-on volunteer activities with the children; and it’s a smile-a-minute opportunity for the regular Gilda’s staff to sit back and watch the love that exudes from the volunteers. Gilda’s Club Summer Camp fills all our hearts with buoyancy – the volunteers, the staff, and especially the children!”

Karen Morrison’s daughter Kinsey, age 16, is a cancer survivor and a volunteer at Camp Gilda. Cancer-free for almost nine years, she had high praise for the NCJW volunteers who “are role models for me.” “They come for the right reasons. Even with their busy schedules they find the time to contribute their time to this camp,” said Kinsey. “They are a great group of ladies, and fabulous cooks!”

Beasley echoed the sentiment. “It is a really big deal feeding 30 hungry kids and managing their transportation and activities. Nothing we do runs as smoothly as this camp. The NCJW volunteers are completely responsible for that.” Many of the camp volunteers return year after year.

Gilda’s Club welcomes volunteers at any time, and all of the programs offered by the club are free-of-charge. Sometimes people living with cancer come to the club to volunteer, finding that offering support to others is the way they cope with the disease themselves.

Kinsey Morrison said that she can relate to the children at Camp Gilda because she remembers being diagnosed with cancer at age 5. “Kids need a safe place to talk about cancer and they need to hear that it’s okay to feel however you feel. They come here and they don’t feel so alone.”

Gilda’s Club (named in tribute to comic actress Gilda Radner, who died of ovarian cancer in 1989) is a community organization for people living with cancer, their families and friends. Local chapters provide meeting places where men, women and children living with cancer and their families and friends join with others to build emotional and social support as a supplement to medical care.

Free of charge and nonprofit, Gilda’s Club chapters offer support and networking groups, lectures, workshops and social events in a nonresidential, homelike setting. Louisville is home to a very special and a very successful Gilda’s Club and Clubhouse.

Toni M. Ganzel, dean of the University of Louisville School of Medicine, recently announced that Jon B. Klein, M.D., Ph.D., who holds the James Graham Brown Foundation Endowed Chair in Proteomics, has accepted the position of vice dean for research …

[by Stew Bromberg, Vice President and CDO, Jewish Federation of Louisville] When I started working in the Jewish community 20 plus years ago I remember everyone telling me that ‘things’ are quiet during the summer and it is the time …