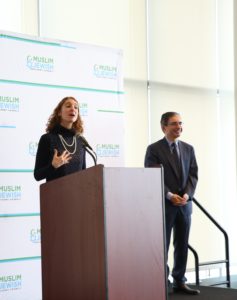 Louisville, on Sunday, became the 11th American metro area to establish a regional chapter of the Muslim-Jewish Advisory Council (MJAC), developing a new platform from which to fight hate crime and promote religious minorities.
The Louisville MJAC was rolled out during a program at the Muhammad Ali Center, which included national leaders of MJAC and its sponsoring organizations: The American Jewish Committee (AJC) and the Islamic Society of North America.
Farooq Kathwari and Stanley Bergman, co-chairs of the national council, spoke at the program.
The Jewish Community Relations Council, a major partner in the project, has been working with others over the past four months to make the new MJAC a reality. Several JCRC members were on hand for the event.
Louisville now joins New York, Philadelphia/New Jersey, Washington, Detroit, Southern Florida, Houston, Dallas, Kansas City and Los Angeles as metro areas with an MJAC.
Becky Ruby Swansburg and Dr. Muhammad Babar will co-chair the Louisville MJAC, which includes a mix of noted leaders from both communities here. Swansburg, a member of the Jewish Community of Louisville Board of Directors, called Muslim-Jewish relations in Louisville an “unexpected alliance” that is increasingly becoming “very, very expected,” while Babar said MJAC’s establishment here is “a celebration of two beautiful faith traditions.”
One standout name on the new MJAC is Lonnie Ali, widow of three-time heavyweight boxing champion Muhammad Ali, who will serve as honorary co-chair.
Ali, who received a standing ovation when she spoke, said her late husband would be “elated” by the establishment of an MJAC council in Louisville, and she pledged to work hard for it.
“This is the work my husband would want me to do,” she said.
MJAC promotes religious pluralism in America, builds coalitions and advocates for legislation and other measures that will tamp down on hate crime, which is on the rise.
According to the FBI, hate crime reached a 16-year high in 2018 with 56.9 percent of the anti-religious incidents motivated by anti-Semitism and 14.6 by Islamophobia. 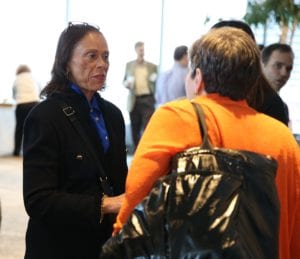 “We love our country, and we say we are better than this as a country,” said Louisville Mayor Greg Fischer, “but it’s happening in our country, so we can’t be naïve to that fact. Good people of all faiths and all backgrounds have to stand up, but also stand together.”
Speaker after speaker at Sunday’s program invoked memories of the 2015 vandalism at the Louisville Islamic Center and the 2017 bomb threat at The J as examples of how Jews, Muslims and Christians close ranks here during times of turmoil, coming together at a rally or scrubbing away anti-Islamic graffiti.
JCL President and CEO Sara Klein Wagner touted the MJAC as the latest achievement in the “long journey” of Jewish-Muslim relations in this city.
“It took us quite a long time to open doors and to open minds,” she said. “Today is really about individuals and people saying I’m here and I want to be part of change.”
Matt Goldberg, director of the JCRC, said his committee had worked for four months to establish the council. He said the Jewish community first became aware of MJAC through Melanie Pell, AJC managing director of regional offices, who lives in Louisville.
“Babar and I thought it was perfect for us because we have already been advocating together,” Goldberg said.  “We are working with Muslim Americans for Compassion.”
The new council will meet quarterly, identifying priority issues and legislation for which to advocate or rally against.
“We will look at Hate Crimes legislation, bias crimes reporting, and other areas of common concern to our two communities,” Goldberg said.
In addition to Swansburg and Babar, the rest of the local MJAC members are Pell, Dr. Ian Mutchnick, Haleh Karimi, Matt Golden, Maha Kolko, Dr. Anna Feitelson, Dr. Tahir Raza, Jasmine Farrier, Dr. Waqar Saleem, Rabbi Joe Rapport, Djenita Pasic, Rabbi Stanley Miles, Ozair Shariff, Aly Goldberg, Azra Terzich, Matt Goldberg, Cham Abdoulie, Ben Vaughan, Farhan Abdi, Corey Shapiro, Abanur Saidi, Kevin Trager, Jeff Jarfi, Sabeen Nasim, Beth Salamon and Jasmina Pasic Smailhodzic.