This month, we welcomed the Jewish year 5777. We began on Rosh Hashanah by taking a good, hard look at ourselves – who we are, what are our values and how we behave in accordance with those values. Then, after Yom Kippur, we began the New Year with a clean slate.

For the Jewish Community of Louisville, 5777 is the year in which we will take a good, hard look at ourselves – who we are, what our values are and where we want to be in 20, 30 or even 50 years. It is the year in which decisions will be made and acted upon. To ensure this will happen, the JCL has launched J-Tomorrow!, a project with a strong committee structure that will look at the community’s physical structures in light of communal needs today and for the next several generations, make recommendations for action and take the steps necessary to make it a reality. 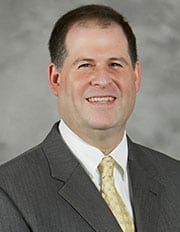 JCL President and CEO Sara Wagner announced that Dr. Jeff Goldberg will chair J-Tomorrow!. “We’re incredibly fortunate that Jeff has stepped up to lead the community forward at this really exciting time. I know he is focused on where we’re going and where we will be in 15 and 20 years and more. We have laid the groundwork, our professionals and volunteers have taken the steps to evaluate our options, understand the needs and put the steps in place to move our work forward. Our leadership understands this and we are grateful for the work they have done. We are pleased that our next steps will be public and look forward to keeping the community apprised.

“Several years ago,” she added, “Jeff led our Planning and Allocations Committee when we had some big decisions in front of us, and I know both from his volunteer and professional experience that he is a thinker. He’s contemplative and intuitive. He sees the big picture.”

Through J-Tomorrow!, the JCL recognizes the world is changing and our Jewish community in Louisville is changing. In the 1950’s, a group of visionary leaders purchased a property on Dutchmans Lane and built the current J.

For more than 60 years, this building has served us well, but it is not always going to meet our needs. It has already been through several additions and a major renovation. “We’re not in dire straits,” said Goldberg, “but we are now thinking about the future. We’re at the point where the building is reaching the end of its serviceable life” and the time has come to make decisions. We are proud of our outstanding Early Learning Center, health and wellness, camp and innovative Arts & Ideas programs, we need a facility to support these new experiences” and be flexible enough to sustain us for several generations to come.”

To accomplish this, Goldberg is pulling together a leadership team that will manage all aspects of the project. “J-Tomorrow! is really going to be a group effort that’s going to require help from many people across the community from multiple generations and multiple backgrounds,” Goldberg said. “We’re going to have issues to deal with ranging from facility design to trying to predict what kind of programming will be required – long term, not just short term – to financial issues and public relations. So we really need everybody in the community to participate” by contributing ideas, coming to focus groups or volunteering in other capacities.

There have been numerous studies done in the past, and J-Tomorrow! will use those as a starting point. The group will gather additional information as necessary to fill in gaps and ensure that plans are on target to meet tomorrow’s needs.

“More information is rarely a bad thing, but what’s different now is we actually have a goal that we’re working toward. In the past, we’ve done studies but we have not been ready to take the big step. We’re looking at replacing a facility that’s served the community for the last six decades and we hope to have a facility that will serve the community at least that long. So, we want to make sure that we’re doing the kind of information gathering and forward gazing that is going to help us design a facility that’s going to serve this community for many generations.”

A generous grant from Jewish Heritage Fund for Excellence has enabled the JCL to take some concrete steps toward this goal. Wagner expressed gratitude for the support, adding, “we’ve been able to really step up our work on this project and move forward.”

“The JHFE grant has also enabled the JCL to engage Chris Bingaman as project manager for J-Tomorrow! and Karen Sherman to consult on our communication planning,” Wagner said. Bingaman is an expert in successfully taking projects like this from the initial planning to completion and will work closely with J-Tomorrow! to ensure all the details are handled properly. Sherman is a communications expert.

“We’ve engaged engineers and other professionals to help us look at land and facilities and take the hard look at what our property and our buildings can and cannot handle for the future,” she added.

An engineer has evaluated the current building and reported that it would be more cost effective to build a new facility designed for today’s utilities and technology than to renovate and modernize the current facility.

Goldberg, Wagner and the JCL Board are currently recruiting the J-Tomorrow! leadership team. That team will establish committees to handle different aspects of the project, and there will be many opportunities for community participation. Those committees are expected to be up and running within the next few months.

While he knows that discussions about a possible new facility have been ongoing for quite some time, Goldberg stressed, “we’re designing a facility that, if we do our job well, will serve the community well and meet our needs for many years. So taking extra necessary time to be sure that we get it right, that we get everybody’s input that we need to, and that we take maximum opportunities to think outside the box and come up with a leading edge facility will be time well spent. We want to come up with something with reasonable expediency, but most importantly we want it done really, really well.”

“We really want input from everybody,” he explained, “and especially people who may not currently feel that they’re being well served by the facilities that are available. We want to know what needs are not being met in our community and how can we facilitate people who feel disenfranchised to become the part of the community, what kinds of program and what kinds of facilities we’re missing.”

“We are a Jewish Community Center,” observed Goldberg, “and we will always meet the needs of our Jewish community, but we also give back to and welcome the larger Louisville community, some of whom have been JCC members for generations.”

“The JCC is part of the Jewish community’s contribution to the city we live in, so we want to have the kind of facility that makes programs and services available that aren’t currently being met by anyone else. We need to identify what those needs are and, in some cases, the Louisville community may not know they need those services yet, so we

need to be forward looking enough to say what these needs are going to be in the future.”
“This is a fantastic opportunity for this community to really be on the cutting edge of medium sized Jewish communities in the United States, Goldberg said. “We can have a facility that can reenergize the Jewish community. It will be a place for current members and future members to find what they need. This could really become something that would contribute to Louisville being an even better place to live, and for Jewish families to move to and help grow our community.”

A Louisville native, Goldberg said, “I grew up at the JCC and attended camp here. I was involved in the teen clubs here, I worked at camp here and I participated in the youth orchestra at the JCC under Rubin Sher, so I spent a great deal of time here in my formative years.”

As a young adult, he moved away from Louisville, but later chose to return to the city. “Ever since my wife [Alyson] and I moved back in 2001, we and our daughter [Sophia] have been involved in programs at the JCC and we recognize the importance of this facility to this community both now and in the future.”

Goldberg is a gynecologic oncologist who earned his M.D. from Northwestern University in Chicago and for the past two years, he worked as the chief medical officer at Jewish Hospital and Our Lady of Peace. Throughout his professional life, Goldberg has received numerous grants and contracts and has a long list of publications. He has also given many presentations on cancer and cancer-related topics, some of which he made to local Jewish groups.

In addition to several professional awards, Goldberg received the Jewish Federation of Louisville’s Lewis W. Cole Memorial Young Leadership Award in 2007. He was a member of the Jewish Community Federation Board and its Executive Committee and Governance Committee. He was also a member of its Planning and Allocations Committee for four years and its chair for two years. He has also volunteered with other organizations in the community.

Adath Jeshurun will present the Louisville premier of the Japanese Choir singing Jewish Music on Thursday, November 3, at 7 p.m. at AJ. Five years ago in Toronto, I was asked to sing My Yiddishe Mame in a concert for …

For years, Jewish Community Center members and visitors have enjoyed working out at The J. But in just a few short days, sweating, cross-training and exercising will have a whole new look, literally. Starting Friday, November 4, The J will …