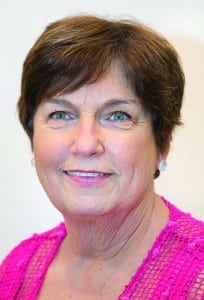 For 31 years, Marsha Bornstein has worked at the Jewish Community Center, and for the past 10 of those years, she’s headed up the Louisville Jewish Film Festival. But recently, she got a taste of what it feels like to be a star.

Bornstein was nominated then voted Today’s Woman’s Most Admired Woman in the Arts in the June issue.

“I was quite shocked really, because I got an email, saying ‘You have been nominated in most admired category in the arts’,” Bornstein said. “I was like, ‘What?’ I called Sara (Klein Wagner, CEO) and said, ‘Is this for real?’”

She said she initially thought it was a kind of scam in which make you buy a book or something. But Wagner assured her it was definitely real.

Bornstein still doesn’t know who nominated her, but she has some suspicions. She said she was surprised that she was nominated in the same category as other prominent people in the arts.

“I didn’t really promote this much myself,” she said. “I’m not going out there telling everybody to vote. It’s too embarrassing. If that’s the way I have to win, I don’t want to win.”

But word of mouth and a little promotion by the JCC’s staff and members helped to push her over the top. “It made me feel good,” she said. “It made me feel like the JCC was proud of my accomplishments. I was very proud. It’s one thing to be recognized for your professional abilities, and it’s another thing to have people personally vote for you. I had the seniors down here telling me, ‘Oh, I voted for you!’ That was very heartwarming. That was the icing on the cake.”

Bornstein had her hair and makeup professionally done for the photo shoot, and when she arrived at the magazine, the staff and photographers treated her very well.

“The very first picture they said, ‘Oh that’s good!’ And they might say that to everyone. But I thought, ‘Well, it’s going to be OK.’

“Then afterwards, I came to work and people were coming into my office because others were saying, ‘You gotta go look at Marsha!’

“That night I went to Yom Ha’atzmaut, and I still had my makeup and clothes on. Someone from my exercise class said she didn’t recognize me at first. It’s a little different than I look in the morning! It’s too high maintenance for me.”

Bornstein said the attention on herself was fun, but it wasn’t her main goal.

“The recognition I felt when I saw (the magazine), my feeling was really, this is great for the film festival. This is my goal – to get the word out about the film festival in the community!

Many Years at the JCC
Bornstein began her career at the JCC as the middle school director running middle school camps. One of the camps she created was an arts camp because JCPS had cut funding for arts education.

“What I liked about it was that it was many different forms of art,” she said. “There were pottery and visual arts, theater and dance, and I brought in art professionals to run it. I’m proud of that camp.”

She was eventually made cultural arts director, and she ran the Jewish Community Orchestra, the Patio Gallery and CenterStage.

“We also had so many classes back then – dance, movement, visual art classes. That’s how I really got into it.”

After her parents became ill, she quit, then came back part-time as director of Jewish Life and Learning after the death of her mother. She managed the Goldstein/Liebson Scholar-in-Residence Program, the JCC Book Festival and the Jewish Film Festival.

“I had to learn how to do this all on my own,” she said. “The others weren’t that hard, but the film festival was tough.”

She had to learn about legal issues, venues, marketing and all the other details that went along with it. “But, you know, that’s like every job. It looks a lot easier than it is.”

The festival has now completed its 17th year. When she first took it over, there were five films shown, with no speakers. This year, there were 11, and many included speakers and discussions after the viewings. The festival grows more popular every year.

Awards Banquet
Bornstein’s favorite part was yet to come. She went to the awards ceremony on June 23, where she gave a speech about a woman she admires.

Her choice was her longtime friend and officemate, Cultural Arts Director Slava Nelson. Nelson was born and raised in Kiev, in the former Soviet Union. Bornstein met Nelson not long after she arrived in Louisville and has been amazed at the hardship Nelson has endured as well as how far she has come in adapting to her new surroundings.

An excerpt from Bornstein’s speech shows the love and admiration she has for Nelson:
“Many people have a difficult life but not everyone continues to shine so brightly and with such enthusiasm for life. She once said at our Thanksgiving table, ‘Every day is Thanksgiving when you can have orange juice.’ She teaches me by example to appreciate what I have, to fight for what is important, to smile, laugh and have fun. Slava is a strong, compassionate, intelligent woman who has an impact on all who know her, and her zest for life is contagious.”

Bornstein is a constant advocate for her friend, the arts and the JCC.

“I have to say, I’ve certainly enjoyed feeling like a celebrity! I don’t seek attention, but it’s fun!” she said.

“It’s been a real feel-good moment. I do thank Today’s Woman for that opportunity. I’m honored and appreciate the opportunity to be able to talk about what I love.”

Bornstein just celebrated her 50th anniversary with her husband, Ed. She has three children, Lisa, Bob and Michelle; a daughter-in-law, Shifrah; and grandchildren, David, Jonathan, Mila, Shai, and twins, Ari and Noa. She is a member of Adath Jeshurun.

Despite scorching heat, the Summer Fitness Fest went off without a hitch on Sunday, June 7, and I was right there in the middle off it, sweating with everyone else. The Fitness Fest included 10 different fitness classes offered outdoors …