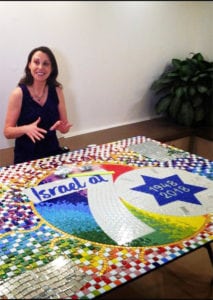 Dr. Lisa Klein, seen here with the mosaic mural she created for Israel’s 70th anniversary, spent months in the lobby of The J working on the project, using enough glass tiles to fill 25 square feet of space. (Photo provided)

While The J celebrated Israel’s birthday at the August 19 Israel Experience festival, a mosaic in honor of the milestone birthday was unveiled.
The six-by-four-foot mural, not including the edge, which contains about 25 square feet of glass tile, will soon hang in the lobby of The J, where its artist, Dr. Lisa Klein, spent several weeks creating the work of art and answering questions from curious passers-by.
“Lisa spent the past few months literally greeting members, guests, campers and their families almost daily as she created a beautiful mosaic to share with the community for years to come,” said Sara Klein Wagner, president and CEO of the Jewish Community of Louisville. “Campers stopped by her table (at the Israel Experience) to find where they had helped put their tiles in.”
In fact, Klein drew her inspiration for the mural from the logo for the 70th anniversary celebration.
“I tried to incorporate a lot of color into the project,” she said, “not just color, but sparkly color, and then the incorporation of the mirrors (mirrored tiles), which enables people to see themselves in it as the celebrants.”
A pediatric cardiologist, Klein has been on sabbatical from her profession to discover her muse. She has only been making mosaics since spring 2017, but her natural talent and love for the genre shine through her work.
Lenae Price, philanthropy and outreach director, noticed Klein’s mosaics and encouraged her to make more, Klein said. When the opportunity came to make a mosaic celebrating Israel’s birthday, Price approached her.
“I agreed to do it,” Klein said, “and with great excitement, I launched into it.”
She was profiled on WHAS 11 on August 1 as she worked on the project.
“I just love the idea of creating a cohesive image out of fragments and making it look like something that’s recognizable and has meaning to it,” Klein told the station. “Israel was created from the fragments of war and conflict, and it’s now a vibrant and bustling community and country.”
Fittingly, Klein attributes her origins as a mosaic artist to a trip to Israel.
She and her husband, Robert M. Klein, co-chairs of the Jewish Federation’s Partnership2Gether in Louisville, visited Israel in January 2017. There, they met up with a photographer friend, Jochanan Kishon, and hiked in Tzippori National Park, where they saw ancient mosaics.
Later, at a Shabbat dinner at Kishon’s home, he told Klein, “‘Do you realize how your face lights up when you see these [mosaics]? You should learn how to do it. Find someone in Louisville to teach you.’”
That’s just what Lisa Klein did.
Throughout most of her life, her artistic side has been in music. She has played piano since childhood, and she’s been playing harp for the past 13 years. She has had some vocal training, too. Her next big artistic endeavor, she hopes, is to land a part in a CenterStage play.
“I’m really pushing the envelope, getting outside my comfort zone,” Klein said. “This project was actually outside my comfort zone, but I’m really glad I did it because I learned so much from it.”