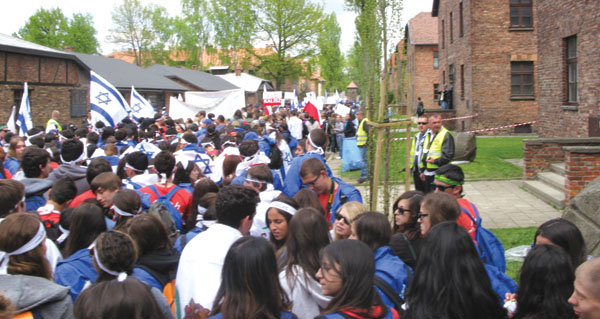 The words “Never Again” in Judaism are words that can only symbolize one thing, remembrance of the Holocaust. For Harris Minstein, these words now have an entirely different meaning. Minstein participated in March of the Living at the end of April.

Leaving for Poland on April 27, Minstein’s first stop was Treblinka, and the first thing he noticed about Treblinka was its national park look. The entire site looks like a memorial to those that lost their lives there.

The memorial is set up in stones the shape of a railroad crossing, illustrating where trains would come for unloading. The Jews would walk from the unloading station to the gas chambers.

There are about 17,000 stones representing all the people from the countries that lost their lives. When you learn about it as a number, Minstein explained, “you start to realize these were all just people, each with their own story, that were essentially deleted.” The next day, the March of the Living participants spent some time cleaning up a cemetery in Poland that was built as a tribute to those who lost their lives in the Holocaust.

A few hours later, Minstein visited the Warsaw Ghetto. “It was really hard to imagine that 60 years ago the ghetto was a fenced in area that was cluttered with buildings that people were crammed into.” Now it is just a normal neighborhood.

Another part of the trip was a visit to the Jewish quarter of Krakow. When the group stopped there, they noted Hebrew writing on each building. In a three to four block radius, were three different synagogues, and Minstein realized “Poland was the home of a really big Jewish community for a long time, a thriving community…which was wiped out” during the Holocaust.

Auschwitz 1 was the very first stop on the next day. “It seemed like a university – organized buildings and dormitories,” Minstein said. “We entered to see barbed wired fences, guard towers and the gate that says ‘Arbeit Macht Frei.’”

The group walked through the camp, past the bunkhouses, worker’s barracks and doctor’s buildings. As he walked through Auschwitz, Minstein could “see hundreds of Yahrtzeit candles and flowers erected to commemorate the deaths of these people.”

The actual March of the Living takes people from Auschwitz to Birkenau, about three kilometers.
“We were at back of line, which extended as far as the eye could see,” Minstein said. “Thousands of Jews assembled … to remember the Holocaust” and pledge, “Never again and to point out that we’re still here after such an effort to eradicate us.

As they walked from Auschwitz to Birkenau, Minstein observed, “there are neighborhoods all around and then, after 100 yards, you see what looks like a military camp. Originally there were 300 barracks, but most were erased to cover up what really happened. Only about 30 remain.

“They didn’t look like barracks at all,” he continued. “They looked like horse stables. You see what looks like a train station with a tower and you realize it was main guard post and platform.”
As the group continued, Minstein saw a barbed wire fence that divided the area. On one side were nice brick buildings. This was the administrative side, and it included Dr. Mengele’s hut, where he performed his notorious experiments.

“On other side,” he continued, “first you see the barracks that weren’t destroyed because the Nazis didn’t have enough time. Then you see hundreds of skeletons of the barracks.” At the site of the gas chambers in the back of Birkenau, Trudy Album, a Hungarian survivor of the camp who traveled with the group, told stories about what happened at Birkenau in 1944.

After Birkenau, the March of the Living set out for Majdanek, “the best preserved concentration camp. They say it could be up and running in 48 hours if you restore power and water,” Minstein said. “This was probably the most powerful point of the trip.”

The first place Minstein went to was the gas chambers. “You come into this room that has just shower heads,” he said, “and at first I thought it was the gas chamber itself. It had big concrete reservoirs where people put their clothing and then were shoved into the showers to be deloused.

“The next room we walked into was the place where they would store the clothes and the gas,” he continued. “Later it was converted to gas chambers. We walked in and saw peepholes in the walls, the hatch in the ceiling and blue stains from the Zyklon B. It was really hard to see that. … The next room was the actual gas chamber. It had huge steel doors with peepholes, and pipes where the gas would be emitted from; and again, the walls were stained with blue from the gas.
“As we left the building,” Minstein said, “a lot of kids were breaking down there and sobbing and lighting yahrtzeit candles.”

Majdanek has several sections. One part contains a structure, “like a sand castle, built of rocks and cement that the guards made prisoners build,” he recalled. There were also exhibits showing the uniforms the Jews had to wear and maps of where the camps were in Europe.

Majdanek also has a striking memorial to those who perished there. The large structure, filled with the ashes from the crematoria, is built so the ashes are visible but cannot be blown away. Behind the memorial of ashes, there was a group of hills where Jews were shot, hundreds of them a day, while other Jews watched.
After experiencing Poland, time in Israel had a different emotional atmosphere. It was nice to “actually have a home now and a place that is ours,” Minstein said. In Israel everything is different, Jews are the majority and businesses close down on Shabbat. “I really loved Israel and might move there next year to live on a kibbutz”.

Minstein explored Israel with the group. They got up at 5 a.m. to climb Masada and watch the sunrise; and they toured Tel Aviv University.

There was also an Israeli component to the march through the Old City of Jerusalem, ending at the Kotel (the Western Wall). ”There were drum bands playing music and people playing shofars, it was really great,” he said.

When the group arrived at the Kotel, Minstein found it a very powerful experience to pray there because you are at the most holy site in all of Jerusalem.”

Towards the end of the trip there is a commencement ceremony for the March of the Living participants in a big amphitheater with all the different groups. There were teens from South Africa, Brazil, Mexico, and Canada. “Everyone spoke different languages, but when we spoke Hebrew together…we realized were all Jews together,” Minstein said.

Before the trip, “I thought of the Holocaust as the Jewish version of 9/11, a history lesson,” he added, “but going to Poland and having it become a real experience…put into perspective what I hold important in my life and how I carry myself as a person, what it really means for me to still be a Jew after all this time.”

Before Minstein went on March of the Living, his mind set was “I am a Jew because it is important and I have got to carry on my faith, but now it is important because we have survived so much, persevered through all this hardship, so many things to try to dismantle us. … It made me proud to be a Jew.”

Israel “is such a beautiful country,” he added, “and the people here are all amazing. It is such a fantastic place to go to. I felt like I was so at home”.

Minstein recommends other people to go on March of the Living, “If you are able to devote time, definitely go on it.

The Jewish Community of Louisville assisted Minstein with a grant from the Foundation for Planned Giving.