Volunteers are an invaluable asset to the community and provide thousands of hours of vital service to organizations and individuals that would not be possible without them. The Ronald and Marie Abrams Volunteer of the Year Award is presented each year to an individual whose life is defined by his/her volunteer activities.

The 2016 Abrams Volunteer of the Year is Mickey Heideman, and thanks to his efforts on behalf of Friends of Ostomates Worldwide  USA (FOW), people around the world who have conditions that do not allow them to pass waste from their bodies in normal fashion have the medical supplies they need to function. Many of them have had cancer or have had their colons removed. 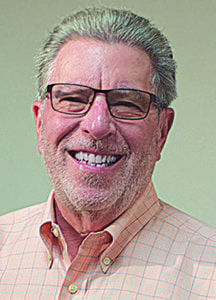 Heideman was surprised to learn he is to receive the award, which will be presented at the Jewish Community of Louisville’s Annual Meeting, Wednesday, June 15, at 6:45 p.m. at The J. For him, the rewards come in letters and pictures from all over the world with touching stories of how the supplies he helped FOW ship make a difference for people  sometimes even saving their lives.

Both Heideman and his wife, Carol, are active with the organization. He usually works in the warehouse three days a week and does additional paperwork at home. He also serves on the national Board and serves the organization as treasurer.

He’s been volunteering for them for FOW for about four years, and she’s been doing it for eight. The Louisville FOW warehouse is the only warehouse in the country that does this.

Donated supplies are the leftovers that come from people who have had a change in their condition or who have changed brands and from families of those who have passed away. In addition, FOW sometimes receives donations from manufacturers. This year, they expect to ship close to 16,000 pounds of supplies.

Heideman is also president of Standard Club and has been on that Board for several years and is a member of the Landings Homeowners Association in Prospect. He’s also a Board member at The Temple and, in the past, served the congregation as president and treasurer. For about three years, he and his wife and their daughter, Maureen, provided food for the congregation’s monthly Shabbat dinners.

He served as a Jewish Family & Vocational Service Board member, the predecessor organization to Jewish Family & Career Services and has worked on several Habitat for Humanity houses.

Originally from Detroit, Heideman came to Louisville in 1968. He has a B.A. in marketing and advertising, and was a partner and owner of Louisville Manufacturing Company, which produced promotional products and merchandise with sports logos. That business closed in 1998, and Heideman continued working in the field until 9/11, when he started his own business, Quite an Impression.

Today he describes himself as a professional volunteer.

Imagine if we could … “see ourselves in a world in ways we have never seen before?” Lisa Eisen, vice president Charles and Lynn Schusterman Family Foundation. Why did this one specific slide from one presentation at the three day …