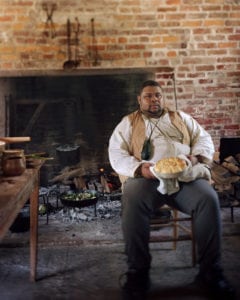 Michael Twitty will make three appearances in Louisville to demonstrate his brand of Kosher/Soul cooking. (photo by Johnathan M. Lewis

Average chefs don’t make it their business to research the ways slaves in Antebellum America cooked and to reenact that cooking for live audiences, something that’s garnered him national attention.

And since Twitty is black and Jewish, he likes to show how both cultures express their identities through their diets – what he calls “Kosher/Soul.”

Jewish Louisville will get an … umm … taste of what Twitty does on Wednesday, June 7, 4:30-7:30 p.m., when the culinary historian opens the 2017 Fresh Market season at The J as the featured chef. Fourteen Fresh Stop markets will open citywide in June.

While in town, Twitty also will appear at the Frazier History Museum on Monday, June 5 for a program called Farm to Frazier: Culinary Roots.

The program is scheduled for 6:30-7:30 p.m. with an antebellum-inspired dinner to follow. The cost is $12, free for members.

Twitty also will give a talk on JOFEE’s monthly restaurant night at The Table in Portland on Tuesday, June 6, from 6-8 p.m. JOFEE – a project of the Jewish sustainability group Hazan – stands for Jewish, Outdoor, Food, and Environmental Education.

A Washington, DC, native, Twitty defines himself as an “African-American-Jewish culinary historian. He is the author of the forthcoming book The Cooking Gene, which describes his culinary journey through the Old South. He also writes a food blog, Afroculinaria, and cooks in the style of Antebellum America and “Kosher/Soul.”

Though some might describe what Twitty does as an “infusion” of two cooking traditions, the 40-year-old chef/historian bristles at that word.

“Kosher/Soul is a conversation between two diasporas,” Twitty told Community. “It’s a call and response to dialogue.”
It’s that dialogue, he said, that leads to understanding the black and Jewish experiences.

And while some of his dishes do seem like fusion cooking – his black eyed pea hummus, for instance – as Twitty would tell you, it isn’t so.

“Black eyed peas belong to both Sephardic Jewish and African American foods; nothing is being added,” he said.

Black eye peas, he explained, originated in West Africa, spread through North Africa and the Middle East and were eventually brought to America “commensurate with slavery.”

Such is how foods can tell a people’s story, Twitty said. “Our food history carries with it the history of our migration. It tells us about who we are.”

Since he began studying kosher and soul cooking over decade ago, Twittty has been impressed by the “simplicity” of both food traditions.

“Simplicity carries a lot of meaning; you have to be simple when you’re landless,” he said. “When you are a people constantly in motion and every couple of generations pulls up stakes and moves somewhere else, that affects you.”

At his Fresh Stop appearance, Twitty will demonstrate ways to prepare the produce available at the market.

Fresh Stop is a needs-based, pay-what-you-can produce market in which customers purchase shares of the produce available. Each share equals 10-12 varieties.

The vegetables and fruits are provided by some 50 farms within a 100-mile radius of Louisville.

The Fresh Stop markets were started by New Roots, a Louisville-based food justice nonprofit. New Roots Founder Karyn Moskowitz, in a prepared statement, called Twitty’s appearances “a unique opportunity for everyone interested in food, culture, and justice to connect with one another and with community members in one physical space.”

Michael Fraade, Louisville’s JOFEE fellow who oversees the Fresh Stop market here, said no one knows who pays how much for their share. The monthly market is merely a place where people find affordable produce, socialize, and watch as a featured chef prepares tasty dishes using what’s available.

“You’re hanging out,” Fraade said. “No one is looking at you, thinking, ‘Oh, this person paid for a half share. Everyone gets the same thing. What you pay is anonymous.”

Though the grand opening is June 7, two Fresh Stop markets were held in May at The J, utilizing the limited amount of food farmers had available.

The Fresh Stop at The J opened for the first time last October. Though it managed to hold just five markets before the end of the season, Fraade said 325 shares were sold.

With 2017 being the first full season for The J’s Fresh Stop, Fraade hopes to sell 60-65 shares per market, if not more.

He said he is selling shares now and needs volunteers to help out. Fraade can be reached at mfraade@jewishlouisville.org or 502-238-2769.

This year’s slate of honorees by the Jewish Community of Louisville include young and old, longtime residents of the city and relative newcomers. Here is a rundown of this year’s winners: Dara Woods When Dara Woods moved to Louisville from …

The 2017 Teen Leadership Awards go to 10 outstanding young people for their dedication to volunteering in the community, sportsmanship, and BBYO participation. “The awards are really important because they show all the hard work [the teens] do for the …

The JCL is supporting LIFE & LEGACY, a program of the Harold Grinspoon Foundation that promotes after-lifetime giving to Jewish agencies and synagogues in Louisville. Through training, support and monetary incentives, LIFE & LEGACY motivates Jewish organizations to integrate legacy …