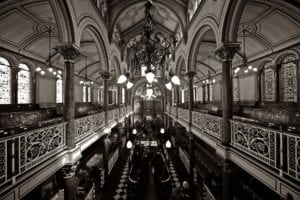 A lesson learned in the synagogue about tzedakah and self-aggrandizement should apply to charity outside the synagogue, too, Michael Ginsberg says. (photo provided)

When I was a child, I often accompanied my father to religious services at our middle class synagogue in Brooklyn. My father was an active member, generous with his time and money in supporting the institution. However, one day during High Holy Day services, he dramatically drew the line at conspicuous generosity.
At that time, congregants purchased tickets to the services and were given reserved seats. In this particular service, the president of the congregation stood at the altar – the bima – and called off the names of the congregants from the seating chart, asking them by name for donations.
The technique set off something of a spirited competition, with congregants trying to out-contribute each other, which I’m sure was at least part of the motivation for the practice.
When they called out my father’s name, he shouted, “Nothing.” The president, clearly thrown off guard, repeated my father’s name, with an apology for not hearing him. My father shouted louder, “Nothing,” setting off quite a buzz in the sanctuary.
I was never prouder of my dad. Even at age 9, I understood his message: Charity is done for its own sake, not for self-aggrandizement. (My mother took a different approach; she once asked my cousin to send me a birthday present and make sure to leave the price-tag in place. But that’s another story.)
I thought of my father when I read a newspaper article recently about Amazon CEO Jeff Bazos’ offer to fund new Montessori schools in low-income neighborhoods. He joins a long list of rich folks, including famous athletes, who make big public splashes of donations to start a school, a foundation, a program that will repair some piece of the planet. They all attach their name to the initiative, and they bypass existing programs that already show promise but lack the funds to fully succeed.
Jeff, here’s my proposal: Attach your name to a donation and reap the praise that comes with your generosity. However, how about announcing your donation as funding for grants to help existing programs that can persuasively document success and need? I’m sure you can find plenty of them.
At our synagogue, the donations shouted out were often in multiples of 18, which, in Hebrew, is signified by the word chai, or life. So, someone would shout, “chai” or “twice chai” ($18 or $36) etc.
Perform a mitzvah, or good deed, Jeff: Go ahead and shout out “a million chai” (you do the math), but keep your plans in your desk drawer and keep your name off the side of the buildings. If it makes you happy, leave the price tag on the grant approval.)

(Michael Ginsberg is a journalist, a retired community college English professor in Louisville and a copy editor for Community.)