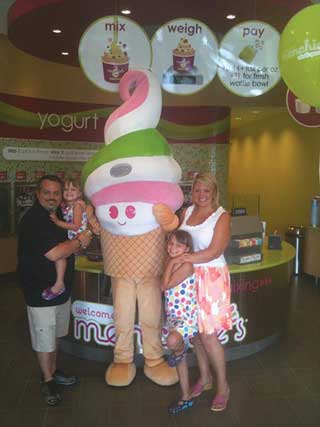 There has been a sharp increase in the number of local shops selling yogurt over the past few months, with one pretty much the same as the other – except for Menchie’s. Although the name sounds a bit like a pint-sized “mensch” (a play on the Yiddish word meaning a person of high integrity), Menchie’s does have one distinguishing characteristic – its yogurt, is kosher!

The very busy Menchie’s store is located in the Shelbyville Road Plaza just a stone’s throw from Trader Joe’s, soon coming to the center. Darin and Misha Roberts own the local franchise and are thrilled with the response thus far.

“We love the idea of having a business dedicated to making people smile,” said Darin, “and the Menchie’s philosophy of providing an outstanding product in a positive atmosphere really appealed to us. You could have the worst day ever, but having some frozen yogurt with your favorite topping can make it all better.” His employees echo the sentiment. When asked for a job description, they quickly respond, “to make you smile.”

Misha is quick to point out that while the yogurt is sanctioned kosher with an OU and K, a few of the toppings might not be. Everything, however, is clearly marked to eliminate slip-ups. The flavors are exotic and specials of the day are posted on Facebook at Menchies-St.Matthews.

Menchie’s contracts their own dairy and they have a research and development department that is diligently working on proprietary flavors. The yogurt base is delivered in frozen form and then carefully thawed to protect its health benefits. It’s healthy, too, since four ounces are just 110 calories. However, it is self-serve, so keeping the amount under the minimum can save both your waistline and your pocketbook – it runs $.44 per ounce.

The Roberts hope to open a second store in Middletown by the end of the year.