When the Jewish Community of Louisville was chosen by the Harold Grinspoon Foundation to be part of the fifth cohort of communities to participate in the LIFE & LEGACY program, the JCL made a commitment to partner actively with Jewish agencies, organizations and congregations here to build a strong and sustainable Jewish community in Louisville for generations to come.

As a first step toward fulfilling that obligation and making legacy giving the cornerstone of Louisville’s Jewish future, the JCL convened an informational meeting at Standard Country Club on December 1. The leaders of many of the eligible groups came to hear details of the program from the Grinspoon Foundation’s Certified Fundraising Executive Christine Kutnick, who will serve as Louisville’s consultant, providing the support and guidance that Louisville will need to secure meaningful legacy gifts and to help build a legacy culture in our community. 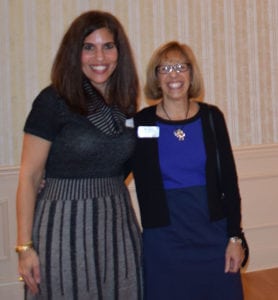 Those in attendance also had the opportunity to meet and talk with Grinspoon’s national director of the LIFE & LEGACY program, Arlene Schiff.

Harold Grinspoon, Kutnick explained, is a generous entrepreneur who made his fortune in the real estate industry. He has a passion for investing in the Jewish community to help it grow and thrive in a sustainable way. He is the driving force behind PJ Library and JCamp 180, both of which The J participates in already. He also instituted the Visions and Voices program that focuses on Jewish art.

With the LIFE & LEGACY program, Grinspoon is working to convey a sense of urgency. Over $59 trillion is being transferred now from the generation that has lived their lives and done well to the next generation. If Jewish agencies, organizations and congregations are not asking these seniors to consider leaving a portion of their estates to benefit the Jewish community, they are missing an opportunity.

If 20 percent of a Jewish agency’s operating budget is not coming from the proceeds from endowments, Kutnick said, it will face a fiscal crisis by 2025. Endowments are essential to nonprofit stability, she stated.

Nonprofits today are evolving. They are faced with increased demands for programming while the competition for the charitable dollar is increasing. Through LIFE & LEGACY, Grinspoon is asking Jewish communities to become proactive and encourage widespread legacy giving.

Kutnick pointed out that 92 percent of Jews already make charitable donations and 79 percent of them give to Jewish organizations, yet many of them have not provided for charitable donations in their wills, and often is it because they have not been asked. Making a legacy gift, she explained, allows someone to do something significant during their lifetimes.

It is a myth, she said, that only the wealthy can leave legacy gifts. She encouraged those present to ask their prospective donors to discuss the possibility of including charitable giving in their wills with their children. Making legacy gifts, she continued, is about showing and teaching children what’s important.

LIFE & LEGACY is a four-year program that provides training and support on how to have legacy conversation, program funding and monetary incentives for collaboration and building successful legacy programs. Since it’s inception, Kutnick reported, the 35 participating communities have secured over 11,000 legacy commitments valued at $450.5 million.

To participate in the program, the Harold Grinspoon Foundation provides up to $100,000 for the community. In Louisville, the Jewish Heritage Fund for Excellence and the Jewish Federation of Louisville have committed to provide matching funds to ensure the success of the program. Jennifer Tuvlin has been hired to coordinate the program.

The JCL has spots for 10 Jewish agencies, organizations and congregations in Louisville to participate in the program, go through the training, write legacy plans and follow through with legacy giving conversations and effective stewardship.

All of Louisville’s eligible Jewish groups were invited to this kickoff program and encouraged to complete partnership applications. The program will only work if there is broad participation.

“This is a great way to support Jewish Louisville,” Tuvlin said. “My job is to help you achieve that goal.” She encouraged all present to complete partnership applications and to building Louisville’s legacy giving program.

The participants in the LIFE & LEGACY program will be trained all winter and spring. The breadth of the interest and involvement from the various Jewish agencies and synagogues demonstrate this community’s recognition of the value of legacy planning and excitement about adding it to their financial development.

For additional information about this program or to discuss legacy gifts for Jewish agencies and synagogues, contact Jennifer Tuvlin at 502-238-2735.

An important part of the Senior Adult program at The J is the Senior Nutrition Program. Seniors come to The J five days a week to enjoy a hot, kosher meal in the company of friends. They make a suggested …

More than 60 people turned up for the annual Holiday and New Year’s Party, hosted by the Senior Department on Sunday, December 18. Brunch was hosted by Gerry Burns and entertainment was provided by Grand Slam.

Rabbi Irwin Kula, the president of the National Jewish Center for Learning and Leadership (CLAL) is described as a thought leader who likes to rock the boat. The description proved apt when he came to Louisville for a well-attended open …