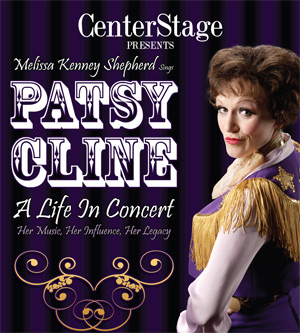 Patsy Cline lived a life as an influential singer, survivor, and tragic soul.  Her life and times will be chronicled in Patsy Cline: A Life in Concert this week only at CenterStage.

Tickets for each show are $15 per person and can be purchased at the JCC or by calling 502-459-0660.  More information on the show can be found at the Centerstage website.

Melissa Kenny Shepherd performs in Patsy Cline: A Life in Concert.  The singer of such classic songs as Crazy, I Fall to Pieces, and Walking After Midnight, Patsy Cline is considered one of the greatest vocalists of all time.  Off the stage, her life was part girl power, standing up to the male-dominated industry in order to further her career, part survivor, getting back on stage after a major car accident, and part tragic.

Following Patsy Cline: A Life in Concert, Centerstage will present Curtains.  The show will run from March 15-April 1.

The annual scholarship competition sponsored by HIAS, the global migration agency of the American Jewish community, is open and accepting applications for 2012. HIAS-assisted refugees who immigrated to the United States are eligible to apply. Last year, HIAS’ annual scholarship …

The JFCS Robert and Marjorie Kohn Pledge 13 Class of 2011-12 has been extremely busy this year. The program, which encourages students to perform community service during the year leading up to their b’nai mitzvah, choose the projects that interest …

Welcome to the Jewish Community Center of Louisville’s Fitness Page! As a member you get free access to over 100 group fitness classes from Aqua Fitness, to Cycling, to Boot Camp, to Yoga, to Spinning and much more! You can …