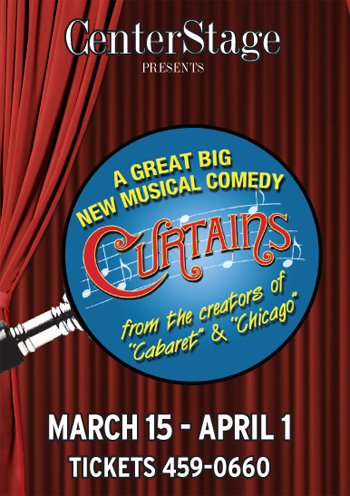 by Brian Kennedy
The curtains come up, and a theatre star is dead.  Who exactly did it?  Find out in Curtains, which opens at Centerstage tomorrow.
Curtains will go up March 15, 17, 22, 24, 26, 29, and 31 at 7:30 p.m. each night.  Matinee shows are to happen on March 18, 25, and April 1 at 2 p.m. each day.  All performances will occur at the Jewish Community Center of Louisville, located at 3600 Dutchmans Lane near the Highlands in Louisville.
Tickets are $18 per person and can be purchased at the door or by calling the JCC of Louisville at 502-459-0660.  More information on the show, and the possibility for rush tickets, can be found at the Centerstage website.
Curtains is a musical murder mystery centering on a hilariously untalented star of Robbin’ Hood of the Old West.  She is murdered, bringing about chaos and humorous situations.  Enter Lt. Frank Cioffi, a detective as well as an avid musical theatre fan.  He will question, investigate, and try to solve the murder…before someone else gets to him.

Ms. Shoko Saito, 70, couldn’t reach the evacuation site before the tsunami hit her neighborhood in Ishinomaki. Instead, she ran to the second floor of her home and watched as the unbelievable catastrophe unfurled outside her window. “I grabbed two …

The 2012 Naamani Memorial Lecture is fast approaching and anticipation is building for this year’s talk, to be delivered by Professor Steven Fine of New York’s Yeshiva University.  Professor Fine’s lecture, “The Colorful Art of the Ancient Synagogue,” will be …

Join the JCL to celebrate Israeli Independence Day on Sunday, April 22. Festivities will be held at the Jewish Community Center and include several exciting events.