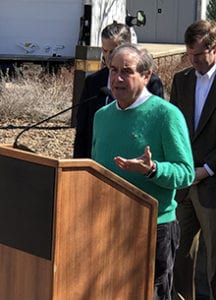 Jewish communities here and nationwide attended vigils and services at mosques in their communities, expressing support and concern in the wake of the murder by a white supremacist of at least 50 Muslim worshipers at two mosques in Christchurch, New Zealand.
The Bend the Arc Jewish action organization created an interactive map to allow users to locate a vigil or solidarity rally near them.
In Louisville, many Jews turned out at a vigil at Jefferson Square Park on Saturday afternoon, March 16, joining hundreds of others from all faiths, or no faith at all, to show their solidarity with the Muslim community.
U.S. Rep. John Yarmuth, told the crowd they had all attended “far too many vigils” and he had run out of things to say.
So he read a letter written by South Bend, Indiana, Mayor Pete Buttigieg, to his city’s Muslim community, which the congressman said reflected his feelings.
“The diversity of our community is its strength,” Yarmuth said, quoting Buttigieg, a Democratic candidate for president. “And the members of the Islamic community have greatly enriched this city, in your worship, in your service, even by the diversity of nationalities among your number. We would be poorer without you…. I wish to tell you not only that you are loved, but also that you are needed.”
“You have an equal claim on the blessings of life in this community and a great deal to contribute,” the letter concluded, “and so we are thankful to count you among us.”
Rabbi Beth Jacowitz Chottiner of Temple Shalom said it is critical, especially now, for everyone to do what they can to bring about “more unity in our world.”
“The day can and will come when all of us will sit under our proverbial grapevines and fig trees, and no one will harm us,” Jacowitz Chottiner said. “We cannot despair, for there is work to be done.”
Other Jewish leaders attended the vigil, including Jewish Community of Louisville President and CEO Sara Klein Wagner and Rabbi Joe Rooks Rapport of The Temple.
The JCL issued a statement shortly after news of the New Zealand attacks Friday.
“The huge loss of life in this incident needs to serve as a reminder that our work to combat causeless hatred must continue,” it said. “May this be the last senseless act of violence and may peace and justice win out always.”
Elsewhere:
• The Levine Center to End Hate and the Jewish Federation of Greater Rochester organized members of the Jewish community to stand outside of the Islamic Center of Rochester on Sunday to show support and solidarity, including with messages on handmade signs.
• Two Cleveland-area rabbis were scheduled to speak Sunday at an interfaith vigil for peace and understanding organized by the suburban Chagrin Valley Islamic Center.
• The Islamic Center of Boulder, Colorado invited the Jewish community to attend a multi-faith vigil on Sunday “to honor the victims, to pray for them and to call for peace.”
• San Francisco’s Bay Area Jews attended prayers on Friday afternoon at several mosques, with Jewish groups encouraging their members to attend.
• The New York Jewish community joined hundreds of fellow New Yorkers who gathered at Washington Square Park for an interfaith prayer session and vigil. The event was moved to an earlier time to allow Sabbath-observant Jews to attend.
• In Great Britain, a Labour Party lawmaker called for action against a neo-Nazi radio station called Radio Aryan, which broadcasts anti-Jewish and anti-Muslim hate.
• And in Pittsburgh, scene of the Oct. 27 shooting of 11 Jews at the Tree of Life * Or L’Simcha synagogue, the Jewish Federation of Greater Pittsburgh is raising money to help the Muslim community of Christchurch, New Zealand. “Unfortunately, we are all too familiar with the devastating effect a mass shooting has on a faith community,” Meryl Ainsman, chair of the board of the Pittsburgh Federation, said in a prepared statement. “We are filled with grief over this senseless act of hate.”