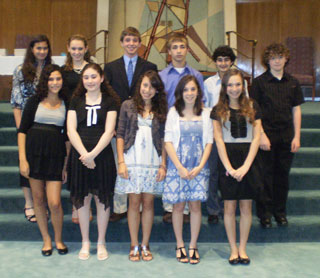 The Louisville Hebrew School held its 106th Graduation and Honors Day on Sunday, May 2, at Congregation Adath Jeshurun. The graduating students led the entire Ma’ariv service, and awards were presented for all classes. The evening concluded with a reception.

The Herman and O.H. Landau Memorial Award for Proficiency in Hebrew, the top award for the graduation class, was presented to Ben Koby; and the Rose Sherman Award for Excellence in Hebrew in the Vav Class was presented to Matt Schulman. LHS Board President Alex Rosenberg made those two presentations.