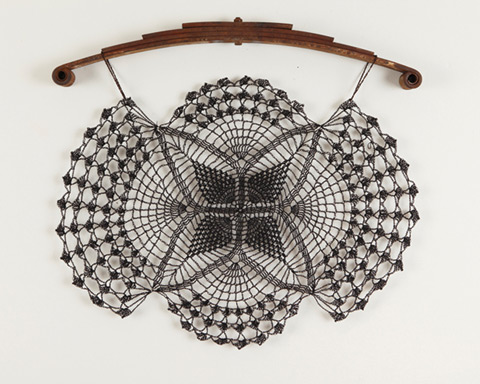 Rusted farm implements combined with crochet work may sound like an odd pairing of elements for an artistic presentation, but local artist Bette Levy has created beauty from it. In fact, her artistic endeavors have earned her kudos from the city of Louisville. At a March 5 reception, Mayor Greg Fischer presented the local textile artist with the key to the city. She was also given the opportunity to showcase her work along with two other artists in a gallery exhibition in the Metro Government Center rotunda.

The exhibit, titled “Shared Boundaries,” is part of the ongoing Rotunda Art Project, a series produced in partnership with the Louisville Commission on Public Art, with assistance from the Louisville Visual Art Association.

For Levy, whose work is frequently displayed in galleries around Louisville and Southern Indiana, the city hall exhibition has been particularly gratifying.

“Just to be asked to be in the show is such an honor,” she said. “I am humbled and excited to have my work in a place where so many people can see it.”

The artist, who has lived in Louisville since 1974, is an established local name whose work has been featured in galleries since the 1980s. She serves as the director of the Patio Art Gallery at Jewish Community Center where she curates, installs and sometimes exhibits her own work within the Center. In 2008, her piece, “An Ayin for an Ayin,” was the cover art for the Guide to Jewish Louisville.

She is also a member and frequent exhibitor at PYRO Gallery, an art gallery co-op in the East Market Street corridor in downtown Louisville. Some of her work is currently displayed at Kentucky Museum of Art and Craft.

The pieces featured by Levy in the current Metro Government Center exhibition were originally displayed as part of the “Tools of the Trade” exhibit in the Carnegie Center Art Gallery in New Albany, IN.

As for the inspiration behind the art, Levy said she liked the juxtaposition of the farm equipment with the delicate crochet work because it is something everyone could relate to.

“This body of work speaks to so many people. When you think of farm equipment, you typically think of men; with crochet, that is typically feminine. But when you put them together, it unifies them,” she said.

Levy, who is a member of The Temple, said her Jewish heritage and upbringing informed her creation of “Tools of the Trade.”

As a child, she played with beads at the handbag factory founded by her great-grandmother in New York in the 1900’s. Her own grandmother was the designer for the company.

“I really grew up making things with my hands,” she said. “The art I created invokes this idea of working for a living, of productivity and meeting goals.”

Daniel Pfalzgraf, the curator for “Shared Boundaries,” wrote of Levy’s work: “Bette Levy’s use of old farm tools and hand-knitted embellishments reminds us of the importance of heritage, relationships and craft often associated with the rural life found further out in Jefferson County and beyond. Levy’s artwork elegantly expresses both her family’s personal history and the history of families all around the Metro area.”

Levy’s art will be on display through June 8. Visitors may see the exhibit any time the building is open to the public, weekdays from 8 a.m.-7:30 p.m. There is no charge to enter Metro Hall, but people are required to go through security and show a photo ID.

[by Deborah Levin] International Convention 2013: “From the Roots We Build” took place in Washington, D.C., from February 14-18. Over 1,500 teens representing 18 different countries from across the globe attended. Three Louisville BBYO teens were there: Natania Lipp, who …

[by Matt Goldberg, Director, Jewish Community Relations Council] Matanot L’Evyonim Matanot L’Evyonim, the JCRC’s Purim appeal for gifts to those less fortunate, has been a huge success this year. This money was raised for Blessing in a Backpack, a program …

Innovative treatment is a critical factor in the care for many patients, as was true for a 4-month-old infant brought to Western Galilee Hospital recently. Left with few care options, the multidisciplinary staff of WGH attempted an approach that has …