Lauren Kolaczkowski graduated from the University of Louisville in 2016 where she was active with Louisville Hillel. In 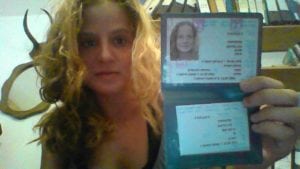 May, she traveled as a participant on Birthright Israel and then stayed to make aliyah. She recently worked with Nefesh B’Nefesh to become an Israeli citizen and is planning to join the IDF soon.

What is your Jewish story? What were highlights growing up?

My story is a little bit of a different one. I grew up in an interfaith family. My mother believes in Reform Judaism, and my father is Roman Catholic. I grew up participating in an interfaith school, called “The Family School” in which I was taught the traditions and beliefs of both religions. It was through this organization that I learned Hebrew. Growing up with a Jewish mother meant a sense of community with other Jews. Those ties were definitely a highlight and shaped who I am today. 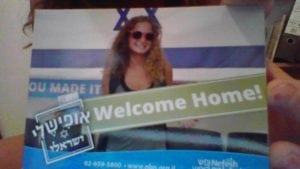 What brought you to Louisville and what were the highlights of being here?

I actually came to the state of Kentucky with a boyfriend over the summer of ’14 and decided that I would apply to transfer. I had been at College of Lake County and Indiana University previously. My favorite part about being in Louisville was knowing that there was always someone there. There were resources, clubs, and caring instructors. I never felt alone. (As you can tell, community is very important to me.) Hillel taught me a lot about who I was, and I took my two favorite courses in my entire education at U of L (Criminology and Alternative Judaism).

When did you know you wanted to move to Israel? Why is it important to you?

I acquired an interest in moving overseas the summer before my final year (summer of 2015). I got very heavily into politics and crime. I was looking into doing police work in Louisville after graduation, but then decided that that path did not feel right for me. I felt like I wanted to protect and serve but had very strong issues with the American system. No country has perfect politics, but I began to do research on traveling, and decided to sign up for Birthright Israel.

The closer time came, the more information I got about the daily attacks and decided that this is where I wanted to be. I want to live in a place where I will be defending people’s lives every day, while being surrounded by a community of people who want to protect mine too.

There is such a need for army here. There are three terrorist organizations planning attacks daily, and only “serious” (meaning casualties) attacks are reported. This is why it is important for me to be here. I want to protect civilian lives, and in my short time here, Ive already absolutely fallen in love with the country. The beach is beautiful, the people are colorful and caring, the mountains and deserts are gorgeous. This is what heaven looks like.

What do you want people in Louisville to know about Israel?

It’s heaven. Literally. If you haven’t been here, you should absolutely make it a priority to visit. (Take advantage of Birthright!) Make sure to see as much of Israel as you can, too! The North and the South are very different! Being in Israel has been the greatest experience of my life, but it took adjusting. It is very different here. Here are some fun things I have picked up since being here.

There is no such thing as “standing in line” in Israel, everyone will cut you in line. You have to be assertive and demand attention or you won’t get it. Also Israelis have a notorious “Israeli attitude.” They say whatever they want whenever they want, even if it’s offensive. There is no filter. On Shabbat all stores (by unenforced law) and public transportation close, even if you don’t observe Shabbat, options for transportation, food and entertainment change greatly.

You are all welcome to my place for Shabbat dinner anytime.

THE CHOSEN ONES Steve Sem-Sandberg; Anna Paterson, trans. Farrar, Straus and Giroux, 2016 Hardcover. 576 pp. $27.00 ISBN: 978-0374122805 The fact that Austria recently very nearly elected a far-right candidate who boldly flirted with the iconography and language of the …

PJ Library is a national outreach program sponsored by the Harold Grinspoon Foundation in partnership with local organizations such as the JCL. Books with Jewish content and themes are mailed, for free, to children ages six months through eight years …

It’s time for the fourth annual Pizza for the Pantry on August 21 at Wick’s Pizza Goose Creek from 12-2 p.m. The fundraiser benefits the JFCS Sonny & Janet Meyer Family Food Pantry Fund. “The event brings the community together …