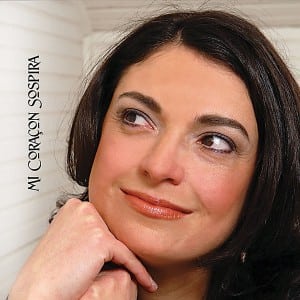 Time is a precious commodity when you work and have a young family. For klei kodesh (Jewish clergy) who serve congregations, it is even more so because they are on call 24/7 to meet their congregants’ pressing needs.

Ladino is the language of the Spanish Jewish community with roots in the Golden Age of Spain. The Ladino repertoire includes songs that document everyday life, mark and celebrate Jewish holidays and lifecycle events, and reflect on the despair caused by the Inquisition.

I don’t think there can be a first CD of Ladino songs that doesn’t include the classics “Avram Avinu” (Abraham, Our Father) and “Los Bilbilicos” (The Nightengales). But even classics can seem new and fresh when presented with a twist.

Cantor Hordes, who worked with classical guitarist Gareth Jones on both the arrangements and the performances, has done just that, making each song on the CD her own. The lyrics sparkle clearly as she infuses each selection with emotion.

In “Scalarica de Oro” (Golden Stairway), a wedding song that says that on her wedding day, even a poor bride should shine, moves back and forth between joy and sadness, capturing the bride’s dilemma.

In keeping with Jewish tradition, Cantor Hordes has also incorporated a tzedakah project into the CD. For every CD purchased, five percent of the proceeds will go to Seeds of Peace, an organization that runs a summer camp in the U.S. for teens who come from areas of conflict around the world. CDs are available for purchase online from several sources for about $18.

Every day the Jewish Community Center has something fun to do. But on August 23, it will have 125 fun things to do to celebrate its 125 years of service to the Louisville community. The JCC 125 Festival will be …