Melvyn Koby, M.D., a University of Louisville alumnus, pioneer and innovator in ophthalmology in Louisville for more than 40 years, has established an award to promote compassion among the physicians training at UofL. The Dr. Melvyn Koby Educational Excellence Award will be presented annually to a resident physician in the Department of Ophthalmology & Visual Sciences in recognition of clinical and surgical expertise, as well as compassion for patients.

Koby grew up in Louisville, where he attended Atherton High School and worked as a clerk in his father’s drug store, Koby Drug Company. He earned a B.A. in chemistry from Vanderbilt University and attended the UofL School of Medicine. After training for two years in internal medicine at Barnes Hospital in St. Louis, Koby served in the U.S. Air Force during the Vietnam War. He returned to Barnes Hospital to complete his ophthalmology residency in 1971 and opened his practice in Louisville the same year. 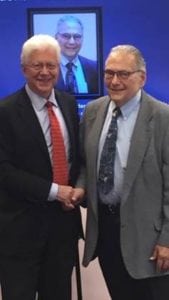 Koby introduced radial keratotomy, the predecessor of LASIK, to the Louisville area in the early 1980’s after spending time in Russia with the inventor of the technology, Svyatoslav Fyodorov. Koby also was the first ophthalmologist in Kentucky to insert an intraocular lens during cataract surgery.

Since retiring from practice in 2013, Koby has volunteered his time at the UofL Department of Ophthalmology and Visual Sciences, teaching and mentoring the residents training to become tomorrow’s ophthalmologists.

To encourage compassion among these young physicians, Koby has established an endowment to support the Dr. Melvyn Koby Educational Excellence Award. The award will be presented to the third-year ophthalmology resident at UofL who displays not only clinical and surgical excellence but shows the most compassion toward patients and families. The first award will be announced in June 2017.

To honor Dr. Melvyn Koby by to making a donation to the fund, please contact: Danielle Jostes at Danielle.jostes@louisville.edu or 502-852-7448.

Earlier this month, a rumor was started in Israel that three Syrian Jewish refugee families were sponsored by a Conservative synagogue and a refugee resettlement agency here in Louisville and that the families are already living here. The story is …

Jewish Family & Career Services is known for its great volunteer program. More than 300 men, women and children help to lighten the load, enhance capacity for service, advocate for JFCS programming, donate to help the less fortunate and give …