Temple Shalom’s exuberant Kathy Karr found something even more likely and upbeat than she is: Klezmer Music.

“I first got interested in Klezmer music when I joined Temple Shalom and purchased a Klezmer CD. I literally wore the CD out. I didn’t know you could do that,” said Karr, who is the principal flutist for the Louisville Orchestra

“I had to buy second CD, and my love of Klezmer music expanded after that,” she added. Now, I only listen to Klezmer music in the car.”

Outgoing and generous by nature, Karr knew she wanted to share the music about which she was so passionate with the entire community, so for Temple Shalom’s annual dinner last spring she brought the Java Jews from Des Moines, IA, to perform. “Everybody loved them. People were dancing and having a great time,” said Karr.

Their success motivated Karr to plan something bigger and better this year, so she organized a full-fledged Klezmer festival, KlezmerFest 2010, which will be held rain or shine at Temple Shalom on May 16, beginning at 1 p.m. 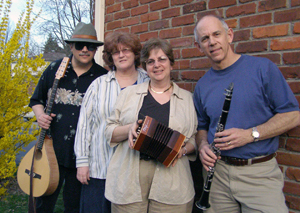 Of course Karr is bringing the Java Jews back for an encore performance, but KlezmerFest will also include the Cincinnati Klezmer Project, the Lost Tribe and River City Klezmer Band. And no Louisville music event is complete without Cantors David Lipp of Adath Jeshurun and Sharon Hordes of Keneseth Israel, who will be guest soloists that day.

The afternoon will also include children’s activities and plenty of food, including corned beef sandwiches and hot dogs. Tickets are $18. Children 12 and under are free. Tickets can be purchased at brownpapertickets.com. 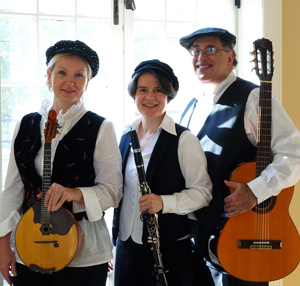 Klezmer music is the “soul music” of the Jewish people, according to Steve Stuhlbarg, director of the Cincinnati Klezmer Project, one of the groups performing at KlezmerFest 2010.

The original Klezmer musicians traveled from shtetl to shtetl, performing at Jewish weddings in the early 18th century. Klezmer evolved into a sophisticated musical tradition that is highly emotional and exuberant. Klezmer and Yiddish dance tunes, love songs, drinking songs, wedding processionals and liturgical melodies once flourished in Jewish communities throughout Eastern Europe, according to Stuhlbarg.

Although it nearly died out a generation ago, today Klezmer music is undergoing an international renaissance, widely acclaimed and celebrated by Jewish and non-Jewish music-lovers alike.

“When played slowly, it makes you want to cry. When played up tempo, the urge to dance is irresistible,” Stuhlbarg said.

Klezmer comes from two Hebrew words – “klei” and “zemer,” said Aviv Naamani, a member of Temple Shalom, who will be performing at the Temple Shalom Klezmer Festival with fellow Temple Shalom member Carol Savkovich in the Lost Tribe quartet. Klei zemer literally translates to instruments of song/tunes or musical instruments, he said.

“The origins of Klezmer lie in eastern Europe with roots in Chasidic music, traditional synagogue liturgy and Gypsy music,” he said.
Naamani and Savkovich have backgrounds in the music of the British Isles, Appalachian music, New England Contra music and American Civil War music, as well as traditional synagogue liturgy, Chasidic music and Israeli music.

“We play Israeli, traditional synagogue melodies and Chasidic music as well, and hope to learn some Ladino and Central Asian tunes down the line. I guess it is our sheer eclecticism that makes us unique,” said Naamani. 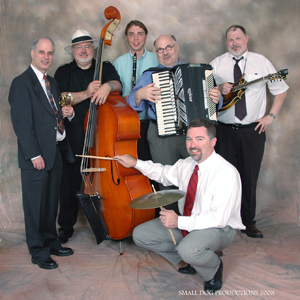 The Java Jews, another KlezmerFest featured band, was organized to help promote a Jewish Food Fair and adopted the name “Java Jews” after a series of crowd-pleasing performances at Java Joes Coffee House in downtown Des Moines.

The band plays  “highly-caffeinated” Klezmer music – a mix of Yiddish and Hebrew melodies combined with Dixeland, avant-garde jazz, and a touch of Spike Jones, according to accordionist Abe Goldstien, who organized the band.

Karr actually came across the Java Jews on one of her many trips to Israel. She was representing the Jewish Community of Louisville, which has a partnership with the Western Galilee, at a meeting of representatives of Partnership with Israel communities in Israel.

There, she met Java Jews member Mark Finkelstein, who was representing Des Moines. “We discovered we both loved Klezmer,” said Kathy, who later traveled to Des Moines to play with the Java Jews. The rest, as they say, is history.

Klezmer is a celebration of Jewish roots, Kathy explained. “It is upbeat and soulful at the same time. I just feel incredibly connected to the music. It reaches my heart. Even though I chose Judaism, I feel real connected to that music.”