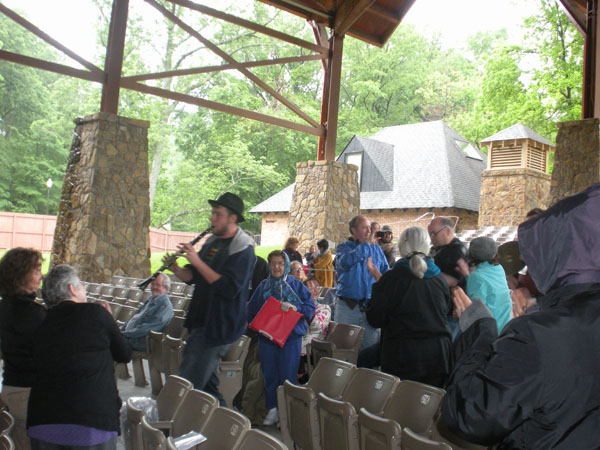 We know the weather can be unpredictable in the spring. One moment we have bright sunshine and the next we’re running for shelter to get out of a deluge, but by the middle of May, we usually we can count on mild temperatures.

Unfortunately, this year, May 15 was cold and wet, but that didn’t keep people away from Iroquois Park for Temple Shalom’s wonderful music extravaganza that was KlezmerFest 2011. While many of the seats in the amphitheater are under cover, winter coats and blankets were definitely the order of the day.

A few brave souls arrived early to enjoy the camaraderie of Jewish tailgating with activities for the children planned by SHORTY, the congregation’s youth group. When the River City Klezmer Band took the stage at 1 p.m., the crowd was still sparse, but as the music began, it grew steadily over the next hour.

Soon, the tempo of the music picked up and sitting still in your seat just wasn’t an option. Yiddish and Hebrew favorites abounded, prompting many people to sing along. And when Hava Nagila was performed, many people got up to dance through the aisles.

The River City Klezmer Band itself was a nice surprise. Over the past year, the group has grown in size, and under Deb Amchin’s baton, their performance has improved greatly.

Amchin described the band as a group of people who enjoy music and get together for the fun of it. So if you have an instrument tucked away in the closet or hidden under the bed, she invites you to get it out, give her a call and join the band. 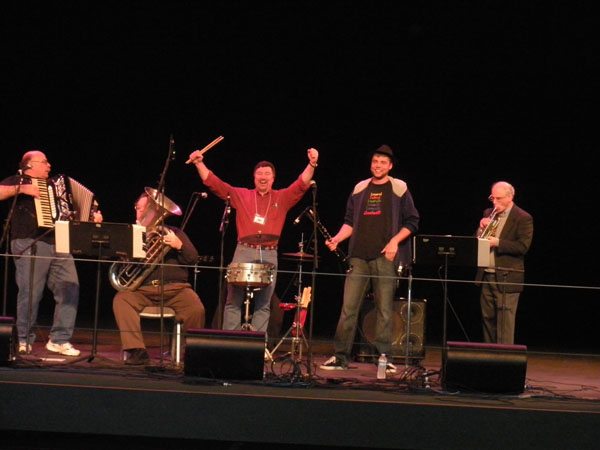 This year, the ensemble included Stuart Urbach on trumpet, Sonny Neurath on alto sax, Al Goldin on Clarinet, Jon Silpayamanant on cello, Jonathan Blum on flute, Joe Dick on drums, Audrey Schmidt on violin, Dick Branson on guitar, Ario Hoseini on violin, Kathy Kahn on keyboard, Marvin Fleischman on harmonica and Jennifer Peacher on tuba. In addition to conducting the ensemble, Amchin is the vocalist.

Next up was Louisville’s newest klezmer group, the Lost Tribe. This group, which also seems to keep growing and improving, includes vocalist Fran Weinstock, Mark Perelmuter on clarinet, Aaron Boaz on violin, Carol Savkovich on concertina, Aviv Naamani, who also helped with the vocals, on guitar, and Kato Humbert on bass guitar. Keneseth Israel Cantor Sharon Hordes made a guest appearance with this group.

Making their third appearance in Louisville – direct from Des Moines, IA – the Java Jews demonstrated why they’re invited back year after year. With Abe Goldstien on accordion, Mark Finkelstein on trumpet, Daniel Menzel on clarinet, John Manning on Tuba and Kurt Bowermaster on trumpet, they kicked the music up another notch.

The Java Jews lay claim to the Yiddish classic “My Yiddishe Mama,” as the perennial favorite was composed by Jack Yellen, the kinsman of one of the band members. Adath Jeshurun’s Cantor David Lipp also joined them and soon had the audience participating in the call and response of “Chiri Biri Bim.”

Louisville Orchestra Principal Flutist Kathy Karr, who discovered the Java Jews when she met Finkelstein in Israel during a visit to Louisville’s (and Des Moines’) Partnership region, the Western Galilee, also made a guest appearance with the group.

Karr and her husband, Matthew, the Louisville Orchestra’s principal bassoonist, served as emcees for the afternoon. The filled the time between acts with background information about klezmer music, demonstrating some of their points with flute/bassoon duets.

While many of the groups that performed that day had very talented musicians who had so much fun playing their instruments that their enthusiasm and energy caught the audience up, too, none did it better than clarinetist Michele Gingras of the Cincinnati Klezmer Project. If this professor of clarinet manages to convey even a fraction of her skill and love of her instrument to her students, they are indeed fortunate. She and her instrument united to sing and talk and croon and scream unlocking every emotion layered into klezmer music. 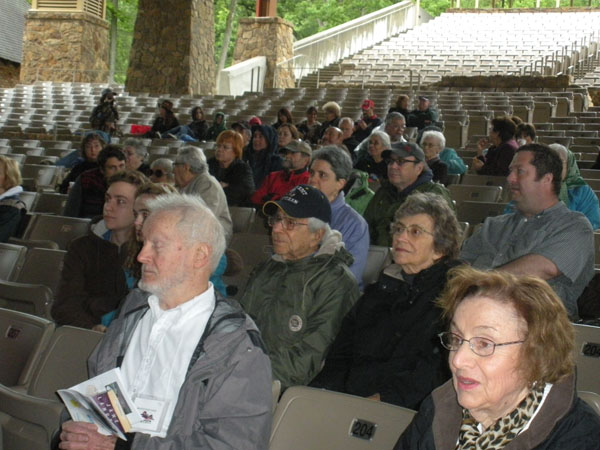 Not to be outdone, Irina Bernadsky demonstrated the true versatility of the Ukrainian mandolin and made even the most challenging passages look like a piece of cake.

Steve Stuhlbarg on guitar and vocals, also a notable talent, rounded out the group for a memorable performance. Rabbi Gaylia Rooks, who often collaborates with Stuhlbarg on music projects, made a guest appearance with the Cincinnati Klezmer Project.

Those KlezmerFest goers who endured the damp cold and were still there in the late afternoon were rewarded for their endurance when Margot Leverett and the Klezmer Mountain Boys, who call New York home, took the stage.

While the first four groups offered straight klezmer fare – Yiddish, Hebrew and instrumental pieces, including many classics and favorites, Leverett and her crew – Barry Mitterhoff on mandolin, Kenny Kosek on violin, Joe Selly on guitar and Marty Confurius on bass banjo – presented a fusion of bluegrass and klezmer tunes, often pairing tunes with similar themes from each style and moving easily from one to the other.