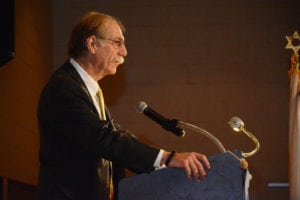 Jay Klempner, who wrapped up his term as chair of the JCL Board of Directors at the June 8 Annual Awards Meeting, said he hoped to see new faces engaged in next year’s campaign. (photo by William Beasley)

Jay Klempner ended his two-year term as chair of the JCL Board of Directors at the Annual Meeting Thursday, June 8.

“We had a lot of work that we accomplished,” Klempner told the capacity crowd in reflecting upon his term, “and we have a lot of work ahead of us.”

He said the JCL had brought in more revenue over the past two years while controlling expenses, and added new staff with new skills. He touted the Jewish Heritage Fund for Excellence for its $200,000 campaign challenge.

“We’re now ready and prepared for a bright future,” he said.

He said he was proud that the JCL had addressed the contentious issue of religious pluralism in Israel over the past year, hosting the heads of the Jewish state’s Reform and Conservative (Masorti) movements in an open forum to discuss the status of liberal Jews there.

“It’s equally important that we, as Louisville Jews, overcome our differences,” he said.

President and CEO Sara Klein Wagner paid tribute to the outgoing lay leader, calling Klempner “realistic, pragmatic and determined.” She also liked how he always seemed to have a good story to share.

“Jay has an incredible respect for our team and professional staff,” Wagner said. “And for that, I’m grateful.”

Wagner used her remarks to laud the JCL for bringing LIFE & LEGACY, a program that nurtures legacy giving by individuals to local Jewish institutions, to Louisville, as well as its homegrown JTomorrow!, which is laying the groundwork for a future J that will serve the needs of a changing community.

(She hinted that there will be more developments from JTomorrow! in September, but she didn’t elaborate.)

According to Wagner, the JCL is doing so much at its Dutchmans Lane campus that “it can’t be wrapped up in a slogan.”

On the business front, the new officers of the JCL board were elected at the meeting. They are Jon Fleischaker (chair), Ralph Green and Jeff Tuvlin (vice chairs), Laurence Nibur (interim treasurer), Becky Swansburg (secretary) and Klempner (immediate past chair).

Two board members were elected to their first terms – Madeline Abramson and Shari “George” Polur – and three were elected to a second consecutive term – Seth Gladstein, Nibur, and Jake Wishnia.

Per by-law rules, Amy Ryan will serve on the board as Program Cabinet chair, Rabbi Nadia Siritsky will serve as Louisville Board of Rabbis and Cantors president, and Rabbi Stanley Miles as JCRC chair.

Klempner ended his own remarks by “challenging” the crowd to be ambassadors for JCL and tell family and friends what is happening at Dutchmans Lane.

“I want to see more new faces at next year’s campaign,” he said.

It has been our privilege to serve together as leadership partners for our Jewish Federation and JCC. We were honored to host our 2017 Annual Meeting on Thursday, June 8, where we …

Most people think of fireworks when celebrating Independence Day, but at The J the holiday means the 4th of July Bash! From 1-4 p.m., members will enjoy a pool party with raft races, a splash contest, a DJ and more! …