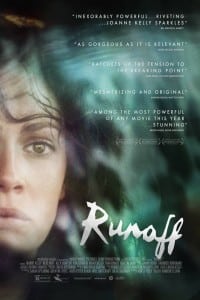 Produced and filmed entirely in Kentucky, Runoff is coming off a successful opening in New York City, where among independent films it turned in the nation’s second-highest Per Theater Average at the box office and was called an “impressive directorial debut” by The New York Times and, according to RogerEbert, a must-see for anyone who wants “to say you were there when a great American filmmaker’s career kicked off.”

Runoff tells the story of a woman who goes to desperate lengths to save her family when they are threatened from their land. It was filmed on working farms in Oldham and Henry counties, as well as locations near Loretto and Erlanger. It stars Joanne Kelly (TV’s Warehouse 13, Hostages), Neal Huff, (Meek’s Cutoff, The Grand Budapest Hotel, HBO’s “The Wire”), Alex Shaffer (The Lifeguard, Win Win) and Tom Bower (Crazy Heart, Nixon, Die Hard 2).

Runoff was filmed over the course of autumn, at harvest time, when the trees turned red and the tobacco leaves hung yellow in the barns. The majority of the cast and crew are Kentucky natives.

When World War II ended, and service men and women came back home, there wasn’t much fanfare. Soldiers and sailors just went home and restarted their lives. Now, some of those who served are getting a chance to get the …

Expect the young Jewish girls of Louisville to look like fashionistas this year at High Holiday services after they attend the Louisville Jewish Community Center’s Fashion Show and Tea Party on Sunday, August 30, at 3 p.m. at Standard Country …

The community is invited to come to dance and celebrate our connection with Israel at the Community-Wide Tzofim Concert and Family Shabbat Dinner on Friday, July 31, at the Jewish Community Center. The Friends of Israel Scouts Inc., or Tzofim, …