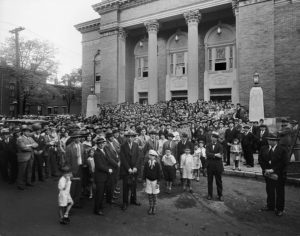 A crowd gathers in front of the then-new Keneseth Israel synagogue, 232 E. Jacob St., 1929. The building, constructed with brick and limestone, with twin Corinthian columns, and menorahs and a tablet carved into the front, was added to the National Register of Historic Places in 1982. (photo courtesy of Archives and Special Collections at the University of Louisville)

Three days after the fire that gutted the old Keneseth Israel synagogue at the corner of Floyd and Jacob, Jerry Abramson visited the site.
He walked around the building, surveying the damage to the place where he became a bar mitzvah and led the junior congregation.
He was saddened by what he saw. The fire had ripped through the roof, and the entire historic structure was in a weakened condition.
“It would take a great deal of money and great deal of passion for someone to bring this building to a new life,” the former Louisville mayor said, “whatever it may be.”
Firefighters labored for hours that Saturday night, March 13, to bring the blaze under control. The cause is still undetermined, but no one was injured.
Now, KI members who recall when the old synagogue pulsed with Jewish life, are looking for a way to channel their feelings about the disaster.
Cantor Sharon Hordes, and Max Green, who attended the synagogue as a boy, think they have one: a vigil or gathering outside the building by members of KI and of the Greater New Hope Community Church, which worshipped there for many years.
“I would love to do some kind of interfaith service with the folks at New Hope,” Hordes said. “When I heard their pastor speak on the news, it occurred to me that both communities are mourning the loss of a holy space, where we prayed and celebrated and mourned our losses.”
Greater New Hope Pastor Mario Martin could not be reached for comment.
Green said a coming together of the two faith communities in the aftermath of the fire could bring some peace and may even inspire some way to save the building.
“It’s going to take a miracle to save it,” he said, “but miracles happen.”
Hordes would like to “build a relationship” with Greater New Hope, one in which members of both faith communities could share stories and experiences from their time in the building.
“I’m sure there’s so much that overlaps,” she said. “Someone could say ‘I remember my son’s bris that happened there,’ and someone else could say ‘I remember my daughter’s baptism.’”
“Just coming together to pray communally is a powerful thing,” Hordes added. “It’s a cool idea.”
The KI building reflects an established trend in many cities, in which former synagogues are converted to Black churches. In many cases, the Black churches have maintained the Jewish symbols affixed to the buildings, not covering them up.
Designed by Louisville Jewish architects Joseph & Joseph and constructed by the local Jewish firm Platoff and Bush, the KI synagogue opened in 1929, just three years after the congregation was formed in 1926 through a merger of two Orthodox congregations, B’nai Jacob and Beth Hamedresh Hagadol.
“The upstairs auditorium hosted many wonderful events from bar mitzvah parties (including mine) to Purim carnivals,”

Abramson said. “As a young child, we sat upstairs with our mother and the men sat downstairs. When the vote occurred to mix the seating (responding to the women’s demand), my dad was on the Board that was sued by those who wanted the seating to stay separate.”
Abramson recalled how fathers and sons came to the synagogues on Sunday mornings, prior to religious school, and put on tefillin for services while the Sisterhood made breakfast.
Green shared another memory of the building.
“I remember walking through the halls, and there were families living in some of the Sunday school rooms. I guess they were otherwise homeless, and they were there with the rabbi’s permission, of course.”
The building is believed to have been unoccupied at the time of this fire, but there has been at least one other disaster. According to Abby Glogower, curator of Jewish collections at the Filson Historical Society, the roof collapsed in 1954. It was repaired, but the congregation moved to its current home on Taylorsville Road 10 years later, in 1964.
Since then, the old building has housed several church congregations, New Hope being the latest. It has been vacant and for sale since 2017.
The fire has motivated Hordes to consider and speak about the role brick and mortar plays in Jewish communal life.
“What is a community without a building, and what is a community that is attached to a building from our past?” Hordes asked. “What is our relationship to a building where we haven’t been for decades?”
These questions can’t be casually dismissed, she said, noting that Jews still mourn the loss of the Second Temple some 2,000 years ago.
“What’s a few decades?” she asked.