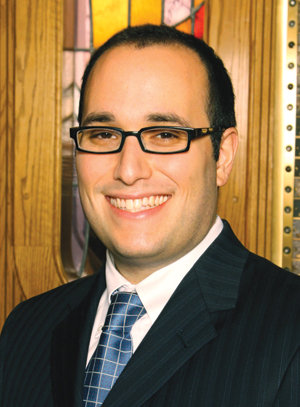 Keneseth Israel Congregation has announced that Rabbi Michael Wolk has been hired to serve the congregation. Rabbi Wolk was ordained by the Jewish Theological Seminary of America in New York in May, and Keneseth Israel is his first full-time pulpit.

Rabbi Wolk and his younger brother, Ethan, are the sons of a cantor and a CPA, Cantor Morris and Geraldine Wolk, and they grew up in Plainview, NY, on Long Island. “Growing up, I was very active in our synagogue by virtue of the fact that my father was a cantor,” he said.

Not only did his parents want him to be comfortable there, “some of the Saturdays when I missed shul, I played shul at home with my mother. She wanted to be sure I had the experience even when, as a young child, I was not cooperative enough to be there.”

Rabbi Wolk attended the Solomon Schechter Day School through junior high. For high school, he attended an Orthodox Yeshiva. “It was a wonderful education that I’m so happy and fortunate that I received. I know how hard and expensive it was for my parents,” he continued, “and I’m grateful to them for making it a priority. I don’t think I could have made it through rabbinical school without that education.”

Despite his strong Jewish background, Rabbi Wolk did not choose his career path until, as a college student, he spent a summer at Camp Ramah in Nyack, NY. “The feeling of creating a Jewish environment and teaching children really resonated with me, and that’s how my journey through rabbinical school began.” He described the experience as transformational.

It was also during college that Rabbi Wolk chose to affiliate with the Conservative movement. “I was very attracted to the ideology and theology of Conservative Judaism,” he said. Conservative’s commitment to tradition while taking into account the modern experience resonated strongly with him, and today, he describes himself as “quite passionate about the form of Judaism I chose.”

“After college, I was given this wonderful opportunity to work as ritual director at Agudas Achim in Columbus, Ohio,” he continued. “That gave me experience working in a shul full time. I found that it can be challenging, but I loved the job. That led me to rabbinical school and eventually here.”

Rabbi Wolk has also been a Hebrew and religious school teacher and has tutored bar and bat mitzvah candidates. He served as a student chaplain at Beth Israel Medical Center in New York in the pediatric, intensive care and cardiac units, and at Jewish Home Lifecare retirement home.

As Rabbi Wolk neared the completion of his studies and ordination, he and his classmates began the stressful job search and interview process. “I went into it knowing I could wind up anywhere and I had no preconceived notions of where I was going to go.”

In the end, he had multiple offers, “but I chose Louisville because as soon as I got here, I felt comfortable – that this is a synagogue and a community I could relate to.

“The people are what define a congregation,” he continued. “The time I visited here, I was so impressed the whole time. I had no problem standing up and leading services for the community even though I had never been here before. When I left, I hoped this would be my first choice, and thankfully, it was.

Asked about his hopes and dreams for Louisville and Keneseth Israel, Rabbi Wolk expressed a desire to build on the strengths of the congregation. “I want it to be a synagogue where people are comfortable bringing forth their ideas, spending their time, and bringing their religious ideas and questions. I want it to be a place where people come to learn more about Judaism.” He noted that KI’s Chai Institute already provides educational opportunities, and he looks forward to growing those opportunities.

Rabbi Wolk also extended an invitation to those in the congregation and community whom he has not yet met, “Come in, say hello and introduce yourself to me. I’ve enjoy meeting people so far, and I look forward to keep doing it.”

Approximately 25 YAD members in their 20’s and early 30’s enjoyed a social gathering and happy hour at Asiatique on Wednesday, August 1. The event gave people the opportunity to meet new people and connect with old friends while enjoying …

Congregation Adath Jeshurun has announced its fall 2012 schedule of simulcast programs in the Live from New York’s 92nd Street Y lecture series and invites the community to join them in the synagogue’s Charles and Jean K. Erskine auditorium. Tickets …

The members of the Jewish Community of Louisville’s Board of Directors are taking their responsibilities to the community seriously. On Sunday, August 12, they met in the Republic Bank building on Brownsboro Road for a Board retreat and devoted several …