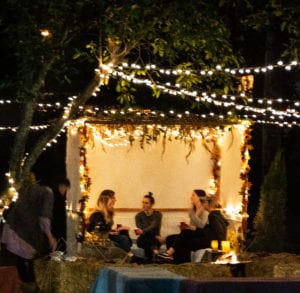 Gabriel Lefkowitz, concertmaster of the Louisville Orchestra, plays the Auschwitz violin for the media at the Frazier Kentucky History Museum (Community photo by Will Beasley)

Sitting in a grove of “legacy trees” to the rear of The J campus, the little sukkah reflected the very mission of JOFEE: It was sustainable.
The frame was made of reclaimed wood from a construction site, the thatch on the roof consisted of cornstalks and other growth from the Community Garden. The linen – the walls of the temporary dwelling – was donated by CenterStage.
Even the potted evergreens decorating either end of the entrance were being reused; JOFEE Director Alayna Altman spotted and retrieved them from Home Depot, where they had been sat out as trash.
Inside, hay bales covered with tablecloths and pillows provided the seating.
“Very Kentucky chique,” quipped Louisville carpenter Yuval Friedman, who helped build the sukkah.
All told, Altman and Friedman erected the frame in 20-30 minutes on Thursday, Oct. 10. Then, with the help of young Jewish Louisvillians, they had it decorated in an hour, just in time for a chili cookout and a tutorial on building your own sukkah.
Total cost of the this 100-percent recycled sukkah: $40 for decorations.
Now, that’s a Sukkot bargain.
The Sukkah Building Workshop, as the event was called, was something Altman has wanted to do since her hiring as JOFEE director.
“I wanted to do something hands-on,” she said. “I wanted to do something creative.”
There was serious prep time that went into the project. Altman and Friedman, an Israel-born construction foreman, ran 2-by-4 wall boards from a demolished house through a table saw, turning them into 2-by-2s that were perfect for sukkah construction.
And Altman, a trained artist, created step-by-step directions for building a sukkah in the form of watercolor paintings.
Susman Construction provided the tools and wood.
Chabad also pitched in with the food for the cookout and advice for a halachic sukkah.
Sukkot is called the Festival of Booths. Considered the most joyous of the Jewish festivals, the main symbol of the holiday – the sukkah – also reopresents the fragility of human life with its flimsy design and thatched roof through dwellers must see the stars at night, according to tradition.
After the cookout party goers learned how to build their own sukkah by constructing from scratch yet another one. They broke off into teams, each built one of the three walls.
The second sukkah was painted by kids at the Oct. 20 Sukkot Harvest Festival at The J’s Pavilion.
Then there was the location for the sukkah: a grove of trees on the campus, mere feet from the din of the Watterson Expressway. They are called the Legacy Trees, sycamores, apple and other species donated over the years by local families, which have since matured into fine shade trees.
“I think it’s a great space,” Altman said of the grove. “We need to prioritize the old growth trees on the new campus.”