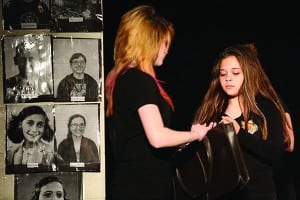 How do you get young people to read and really engage with a story? How do you get them to stretch and explore what that story means to them? How do you draw out their creativity and empower them to share their experiences with others?

Funded by a generous grant from the Jewish Heritage Fund for Excellence and conducted in partnership with Brown University’s ArtsLiteracy Project, the University of Louisville, Stage One Family Theatre and the Center for Holocaust and Humanity Education, the teachers participated in a two-day retreat to train in the arts-integrated approach to literature studies and best practices in Holocaust education.

In January they brought it into their classrooms and by March, the classes were ready to share the results of their work.

Using The Diary of Anne Frank as a primary source, members of the participating classes read and discussed the book. Not every student read the entire diary, but all of them read at least part. 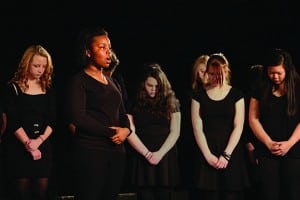 Then their teachers challenged them. What does it mean to you? How can you connect with it? How can you convey that connection to others? How do its themes relate to your life today?

A visit to Noe Middle School for the final production of the project, “Humanity’s Footprint,” revealed that each student had grasped onto at least one idea and made it his/her own. Together, they wove together themes first articulated by Anne Frank during the Holocaust that still have meaning today. And each student contributed in a unique way.

The production was truly multimedia. It included readings from the Diary, a variety of video images, visual art, prose, headlines and poetry readings – both original and drawn from other sources, music – both instrumental and vocal – and modern dance.

Students also had the opportunity to express their own feelings about what they learned and how they felt about it. Their responses were all different, yet together, they painted a broad picture of many of the Franks’ themes. It’s important to make a difference. We have to study the past so we won’t repeat it. It is important to coexist and to overcome our differences. Depression. A community footprint. Live respectfully.

There were many moving moments including a personal story a girl told about being told to kill herself and how she found the strength to go an and, with great difficulty came to realize that she had self worth. 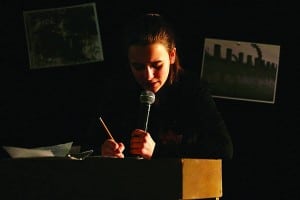 After the performance, one of the students, Maddie Goldstein, stayed behind for a few minutes to explain her take on the project. Bringing history into context is important, she said, so we don’t repeat it. We have to keep the story of the Holocaust alive for the next generation.

The teachers named at the beginning of this story were the lead teachers at their schools. They collaborated with social studies, English and drama teachers on the project.

The period between Passover and Shavuot is an important time for the Jewish people. While Passover marked the start of liberation, the Torah describes the journey from bondage to freedom as a lengthy process: the children of Israel wandered in …

Did you know that Jewish Family & Career Services embodies a strong spirit of entrepreneurship and innovation? How, you might ask? Over the years, JFCS created many new programs and services, including counseling services to individuals and families, services to …