Not every woman lawyer breaks down gender barriers, writes textbooks, teaches a generation of women to follow in her footsteps and still finds time to bake brownies for her class.

But that is wh 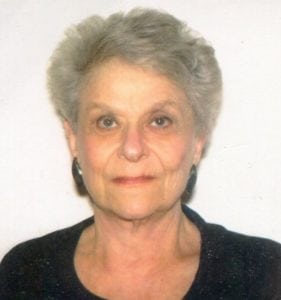 y family, friends and colleagues of Jacqueline Rothschild Kanovitz, who died Wednesday, January 18, at Baptist Health of Louisville, remember well the first female professor of the University of Louisville’s School of Law.

“She was an American original,” said her husband, Dr. Bob Kanovitz. “By being herself, she broke down many barriers. You must realize what it was like. Two generations learned from her what a woman could do with the law.”

Like many women of her time coming out of law school, Kanovitz couldn’t find a job. Many law firms were closed to female attorneys.

“As she said,” Barrazotto recalled, “she was female, pregnant and Jewish, and no one would hire her but Legal Aid.”

She worked for Legal Aid for two years.

The dean of the law school recommended Kanovitz for a clerkship to federal judge, husband Bob said, but that jurist rejected her.

However, that rejection proved fortuitous. The dean would turn around and hire Kanovitz for a faculty position. She became the law school’s first woman professor and eventually its first tenured woman professor.

She served as an associate dean for the school, which was later renamed the Louis D. Brandeis School of Law, from 1989-90, and she authored a leading textbook, Constitutional Law for Criminal Justice, which is in its 14th edition. She also became an advocate for women entering the legal profession.

All the while, she taught her students in and out of the classroom.

“She would take some women who needed a little help out shopping so they would understand the appropriate professional image to convey,” Barrazotto said. “She supported us in any way she could. She would be our cheerleader, our advocate, our facilitator, a teacher beyond teaching academics.”

She also found time to bake brownies for her students and even make them part of her own family.

“She would invite me over to her house; I would go out to dinner with her and Bob,” Barrazotto recalled. “She was just all-embracing. I had come to law school from Virginia, I didn’t have much family here, so she made me part of her family.”

A woman with a sense of humor and sharp wit, Kanovitz was not above using both skills on occasion.

Bob Kanovitz recalled a time in Pittsburgh — the couple moved there briefly so he could accept a fellowship — when the lawyer handling the closing on their house refused to shake hands with Kanovitz. Later, after thinking better on it, he said as times change he didn’t know what to do when a woman offered her hand.

“She was a hater of prejudice and misogyny,” husband Bob said. Still, he stopped short of calling her an activist.

“She was a true America pioneer by believing that a woman [acquired] rights by going out and exercising them.”

He also said his wife had a “great dignity,” something she exhibited in her final days.

As Kanovitz’s daughter, Elana Levitz, recalled, when she learned her prognosis — she had cancer — she took the news philosophically, reflecting on all the blessings in her life. She always said thank you to the nurses who checked her vital signs.

“She said the last weeks with her family were some of the most beautiful, meaningful times of her life and she wouldn’t change them,” Levitz said. “Only my mother could find beauty in everything, including dying.”

Susan Duncan, acting dean of the law school and another of Kanovitz’s students, said she was “deeply saddened” by her passing.

“She taught me negotiable interests. Little did I know, I would teach that same class nine years later,” Duncan said in a story for the law school’s webpage. “She also provided me valuable and sometimes comical advice on my faculty career. She supported this school, and me with every role I accepted. I will miss her intellect, her love of life and her wonderful smile and laugh. She truly was a legend.”

Born, December 11, 1942, in Louisville, a daughter of Isaac and Jenny Rothschild, Kanovitz is survived by her husband, Bob; her children, Michael Kanovitz and Elana Levitz (Darren); her sister, Barbette Loevy (Arthur); and grandchildren, Anya and Simon Kanovitz and Jacob Levitz.

The family would like to express their profound gratitude to the staff at Baptist Health Oncology Ward.

Funeral services were Sunday, January 22, at Herman Meyer & Son, Inc., 1338 Ellison Ave. The burial followed in Adath Jeshurun Cemetery. Donations may be made to Mazon at Congregation Adath Jeshurun or the Jewish Family & Career Services Food Pantry, to feed the hungry.

Just a few weeks ago, I was asked by a reporter how I felt about a “so called” religious freedom law that is currently under consideration in Frankfort.  This law, which mirrors similar laws throughout the country, proposes to provide …

As we begin 2017, we are faced with an increasingly violent world. For KentuckyOne Health and Jewish Hospital, committed to bringing healing, not only within the walls of our hospital, but out into our community, this means dedicating ourselves to …

There is a wide variety of acts for the Louisville’s Got Talent Finale on Sunday, February 26. Twenty acts were named to the Finale from the more than 50 who auditioned on Sunday, January 15. The fourth annual competition was …