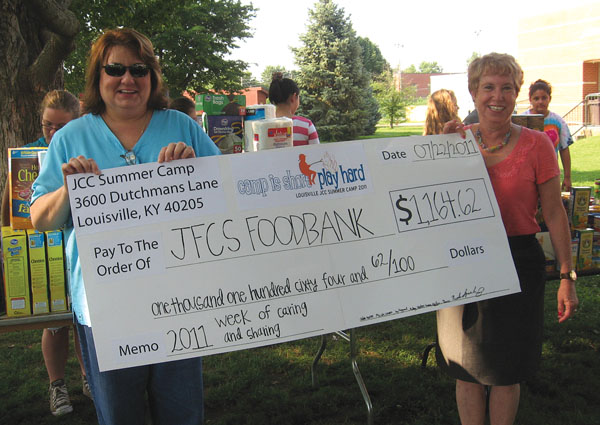 When Shelley Kahn began work at Jewish Family & Career Services in July 2005, she was hired under a three-year grant from the Retirement Research Foundation in Chicago. She wound up staying for almost seven years, during which she built a strong and dedicated corps of volunteers that helps JFCS in many areas and benefits the community as a whole.

Kahn now has decided it is time to retire – to travel a bit more and spend more time with family.
She has one more project she wants to complete – the March 11 and 12 sale of Passover items that are hard to find in Louisville. So she’ll wrap that up and her last day with the agency will be March 15.

To help thank her for her innovation, creativity and organization that have led to so many successful volunteer programs, all volunteers are invited to a reception in her honor on Wednesday, March 14, at 5-7 p.m. at JFCS’ Roth Family Center.

“Shelley has developed a wonderful foundation for our volunteer program and she has infused the program with professionalism, compassion and Jewish values,” said JFCS Executive Director Judy Freundlich Tiell. “We will miss her and wish her well on her retirement.”

Before coming to JFCS, Kahn was activities director at Four Courts. “I loved what I did,” she said, but when her father-in-law and her father became ill, she took the time she needed to care for them.

After their deaths, Kahn found herself at a crossroads. “I didn’t know which direction to go next.” Then came the call from Mauri Malka at JFCS.

The Retirement Research Foundation postulated that retired seniors still had a tremendous amount of energy, knowledge and a desire to give back to the community through meaningful volunteer work. Kahn’s job was to work with those seniors and match them up with volunteer jobs all over Louisville. Sometimes it worked the other way, too. She would learn of openings and recruit people to fill them.

That led to her current position of volunteer coordinator and kept her at JFCS for another 3-1/2 years.
“Working here has been a big growth period in my life,” Kahn said. “It is an honor and a privilege to say I have worked at JFCS. … I work with incredible staff people who work diligently for the clients we serve.  The agency is mission driven and client focused. Executive Director Judy Tiell runs the agency in a way that the clients’ needs come first. I have a lot of respect for that.”

When Kahn started working at JFCS, the agency already had an active board, several committees and a few people doing individual volunteer projects. There was a Family Mitzvah Committee and Pledge 13 was in place to give bar/bat mitzvah candidates the opportunity to do 13 hours of community service in the year leading up to their simchas. The agency also had begun the Senior P.A.L.S. program.

“What I did with those programs was kick them up a notch,” Kahn explained. Mauri Malka created the program in 2003 to provide affordable transportation to seniors who could no longer drive. When Kahn became volunteer coordinator, the program had just seven volunteer drivers who provided a couple of hundred rides.

“Today,” she said, “there are 48 people who actively drive every month. … Last year, we provided 1500 rides.” The program has expanded to include a couple of part-time paid drivers, a couple of staff members who orchestrate the process, and a handicap-accessible van for those needing wheelchair rides.

“A volunteer comes in and makes reminder calls,” she added. “This program is critical and helps to keep folks who use the system independent. They are able to make their own choices … and get where they need to go.”

The Family Mitzvah project is still going strong. This program is designed to bring together young Jewish adults and their young children to perform Mitzvot as a family. “The whole project is set up so young children can perform mitzvot and begin learning how to give back at a very early age.” This year’s chair, Beth Salamon, and her committee are continuing to create that kind of environment. The next event, Sunday, April 1, 1:30-3 p.m. at JFCS, will celebrate Passover. Families are asked to bring regular foods to be added to the JFCS Food Pantry and they will be organizing Passover food to be distributed to local Jewish families in need.

The Robert and Marjorie Kohn Pledge 13 program was created the year Margie was JFVS (Jewish Family and Vocational Service, predecessor to JFCS) president. This year, about 35 seventh graders are participating in the program. On the day of their bar/bat mitzvah, each teen who completes the program is thanked publicly and receives a certificate and gift.

Kahn has also been instrumental in growing JFCS’ food pantry. “It was in a small closet in the agency’s previous location,” she explained, “but after JFCS moved into its current building, Janet and Sonny Meyer got involved and endowed the Food Pantry Fund. We were able to move the pantry, double its size and capacity and include refrigerated and frozen foods from Dare to Care.”

Kahn credits the Meyers for the “very active Food Pantry Committee” of about 40 people, who see their first responsibility as educating the rest of the Jewish community that there are hungry Jews in Louisville. More volunteers are always welcome.

“In 2008, when the economy took a downturn,” she stated, “we started seeing the usage of the Food Pantry skyrocket. There have been people in the Jewish community who used to donate to the pantry who are now using it.”

Kahn also works with the Food Pantry Committee on its annual Pancake Breakfast fundraiser. “We make terrible waiters,” she said, “but we make a lot of money for the Food Pantry” to help keep it stocked. Along the way, they have a lot of fun and enjoy “great camaraderie.”

Hunger is a year-round problem, so why not help keep the Food Pantry stocked with a Passover Food Sale? Kahn decided it was worth a try since a number of products are hard to find in Louisville. The Passover Sale Committee helped brainstorm to come up with the products people have to travel out of town to find.
“I’ve ordered mayonnaise, salad dressings, ready-made cakes, chocolate chips, mints” and “countless other items,” she said. “We’re starting very small – just dry goods.”

Of course, the Food Pantry users need Passover supplies too. “Last year, we had 30-40 families that we provided with everything for Passover,” she said. Donations of these products are welcome, including matzah ball mix, cake mixes, canned chicken soup, gelfite fish, potato kugel mix, etc.

Kahn spoke of many other volunteer opportunities available through JFCS. The Multicultural Department needs mentors to help new Louisvillians through the process of starting a business; professionals who are willing to be once-a-year consultants to talk about their roles as lawyers, accountants, marketers, etc.; and Loan Committee members to review client business plans and make loans from a federal grant program JFCS manages.

Volunteers are also key to some fundraising committees, like the MOSAIC Awards, this year on May 17 at the Henry Clay (see story, page 12) and the Republic Bank Golf Tournament, scheduled for June 25 at Standard Country Club.

JFCS is also reviving its personal histories project started by Ann Friedman (z”l) and Kahn said the agency is looking for volunteers to interview people over age 70. “The beauty of this project is that the volunteer comes and interviews the person at his or her home. When we have the final product, we keep a copy and the person who was interviewed gets a copy to share with his or her family.” Anyone interested in being interviewed can contact JFCS, 452-6341.

One of the biggest projects Kahn undertook was the book sale that was part of JFCS’ 100th anniversary. “We thought we’d have a little book sale,” she said, “and we ended up with 14,000 books. Over 100 volunteers worked on the project, categorizing books, tapes and CD’s.”

Of all the projects she worked on, Kahn claims there is only one she created herself – The Doris and Theodore Meyers JFCS Shabbos Friends Program. “Volunteers go to assigned assisted living facilities and nursing homes and visit Jewish seniors once a month on Shabbat,” she explained. “They bring electric candlesticks, a freshly made mini-challah and grape juice and say the blessings together.”

Kahn described the visits as social and spiritual. “We reach out to seniors who are living in isolated environments. Most facilities are really good about celebrating Christian holidays,” she explained. “They have church services and Christmas trees, but they almost never have anything for Jewish residents, so they feel as if they’re not part of that community.” There are a few exceptions.

Shabbos Friends currently serves 14 facilities, but JFCS already has a waiting list of facilities that want to participate in the program and more volunteers are needed. The program was endowed by Carole Snyder and Sara Yamin in memory of Snyder’s parents.

“The most rewarding aspect of working at JFCS, Kahn concluded, “has been working with such wonderful and dedicated volunteers, who have truly made such a positive difference in our community. From the one-on-one telephone reassurance calls made to an isolated senior, to the sorting and organizing of food, to celebrating Shabbat with a Jewish resident in a nursing home, to working with an immigrant starting a new business, to driving a senior to a doctor’s appointment … all of these (and more) righteous and good acts have made Louisville a better place in which to live.

“With 400 plus volunteers, all working in different capacities, they have made such a huge difference in so many lives. I have met many new people and formed new, wonderful and rewarding friendships, and this has been the real blessing of working at JFCS as the first Volunteer Coordinator in JFCS’s history,” she said.

Kahn is a member of National Council of Jewish Women, Louisville Section; the Jewish Community Center; The Temple; The Temple Sisterhood and The Temple’s Caring Committee, as well as the Indianapolis Hebrew Congregation.  She is also a volunteer with Alley Cat Advocates.

Kahn and her husband, Marshall, will commute between Louisville and Indianapolis, as Marshall’s business is in both cities. They also plan on doing some traveling and spending time visiting family. They have three adult children and two grandchildren with one more on the way. Their son, Brian, and his wife, Emily, and grandsons Noah, 5, and Simon, 2-1/2, live in Indianapolis, as does their son Jeffrey. Their daughter, Erin, lives in Chicago. Shelley’s mother, Esther Zukof Cavanaugh and her husband, Chris, live in Florida.

Kahn plans to do some gardening and will wait to see “what my next chapter in life will be.”

Tu B’Shevat marks one of our most important annual milestones in Judaism. We celebrate nature’s renewal, fresh with possibility and splendor as spring approaches. The yearly cycle is well underway as we work to earn Hashem’s blessing us in the …