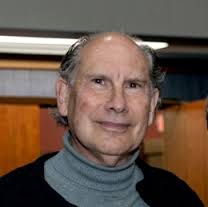 Friedman was a dedicated artist and prolific creator. He was a graphic designer, photographer, artist, furniture designer and videographer. The man and his work defy easy description.

Early in his career, Friedman created posters for non-profit organizations, many of which are so memorable that people today can instantly call them to mind at the mention of their titles.

“[He] was devoted to and proud of the Louisville Orchestra,” said longtime friend Gila Glattstein. “The extraordinary work he did for them is very well known and accepted by the community. Perhaps the most recognized piece in that series is French Horn Filled with Ice Cream.”

Last year, during a 50-year retrospective exhibit of his posters at the Frazier Museum, Friedman celebrated that poster “by getting area school children to re-enact the poster. It took them three minutes and 40 seconds to fill a real horn with ice cream,” Bruce Snyder wrote in an article for Community last August.

The exhibit included 320 of Friedman’s posters and several other installations, including a video. “I’ve never done a video before,” Friedman told Snyder. “I wanted this thing to showcase energy and rebirth. I also wanted people to walk through a fabric. I wanted more than photographs on a wall.”

So Friedman, who has always loved nature, chose water as the subject of a four-minute film he created. He also hung long pieces of fabric from the ceiling that people could walk through and touch while exploring his work.

Friedman’s early work also included the remarkable Toe On Egg for the Louisville Ballet and Fresh Paint, which shows stark, white eggs behind a row of red, yellow and blue yolks.

After his poster phase ended, he turned to photographic imagery of trees, water, flowers and a ballet dancer. These images were later printed on metal and fabric. His last work was a series of short videos that can be viewed on YouTube.

“I hope I touch a few people with my art,” Friedman told Snyder. “When people ask me what is my favorite poster, I always say the next one. Doing what I do, I hope I touch someone in a positive way, starting with a hug.”

Born and raised in Kentucky, Friedman graduated from the University of Louisville with a bachelor’s degree in graphic design. He went on to receive the Kentucky Governor’s Award in the Arts and his works are included in the permanent collections of the Museum of Modern Art in New York, the National Gallery of Art in Washington D.C., the National Museum of Poster Art in Warsaw, Poland, the Dansk Plakamuseum in Aahous, Denmark, the Brown-Foreman Collection and the Marriot Hotel Corporation.

The family thanks the doctors and nurses at Baptist Health for providing such wonderful care.

Expressions of sympathy may be made to The Leukemia Lymphoma Society.

Information for this story came from his official obituary and the biographic information published on his web site, imagesol.com.

(Shiela Wallace, editor emeritus, compiled and contributed to this story.)

I’m experiencing some extreme culture shock. Not because of Israel, but because being a jumper rider is so different from an event rider. They’ve never heard of a monoflap saddle, and I am the only person here with a monoflap. …

(Editor’s note: Andrea Glazer of Louisville, who is competing for Team USA in the 20th Maccabiah Games in Israel, July 4-18, as an equestrian, will be blogging about her experiences from the Jewish state. She has agreed to share her …